Strongly Inclined to Be Devoted to the Ministry 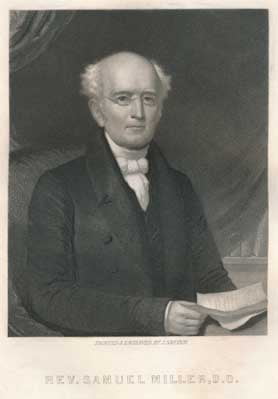 Samuel Miller was born in Dover, Delaware on October 30, 1769. As was typical for his day, he studied theology privately in preparation for the ministry. Upon completion of his examinations he was ordained by the Presbytery of New York on June 5, 1793 and installed as pastor of the First Presbyterian church of New York City, where he then served from 1793-1801. He next served the Wall Street church from 1801-1813, before answering the call of General Assembly to serve as professor of ecclesiastical history and church government at the Princeton Theological Seminary, Princeton, New Jersey. As the second professor at the Seminary after Archibald Alexander, Miller served the Seminary from 1813-1849, finally taking emeritus status at the age of 80. He died less than a year later, on January 7, 1850.

Resting behind the simple facts of our first paragraph is the spiritual depth of this man of God.  Upon taking the new ministry at Princeton, he sat down and wrote out seven resolutions.  We don’t have space for all seven of them, but the first one stands out and indeed sums up all the rest.  It reads, “I will endeavor hereafter, by God’s help, to remember more deeply and solemnly than I have ever yet done, that I am not my own, but Christ’s servant; and, of course, bound to seek, not my own things, but the things which are Jesus Christ’s”  That says it all with respect to the character and conduct of this seminary professor.

Words to Live By: Samuel Miller’s first resolution is but a summary of those words written down by the Apostle Paul, in 1 Corinthians 6:19

, when he stated in the context of the need to live a moral life, the following: “Do you not known that your body is a temple of the Holy Spirit, who is in you, whom you have received from God?  You are not your own; you were bought with a price. Therefore honor God with your body.” (NIV)  Whether soul or body, each of us should make Samuel Miller’s resolution our own resolution, and indeed recommit ourselves to it at pivotal points of our life, such as our birthday. It would be exciting to see what God would do with such a committed Christian if this is true of you and me.