William Buell Sprague makes the notation in his Annals of the American Pulpit, that Richard Webster in his History of the Presbyterian Church in America, has this to say relative to Makemie’s trial— 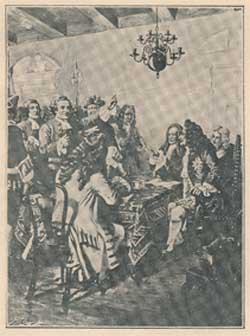 “The Supreme Court met on Tuesday, March 11 [1707], at which time Makemie was present. The grand jury examined four witnesses, who testified that Makemie preached no false doctrine. His trial was set down for the June term; and Makemie, on his own bonds and those previously given, was allowed to depart. The law of the Province was, that all persons professing faith in God by Jesus Christ His only Son, may freely meet at convenient places and worship according to their respective persuasions. It will be seen from this that Makemie, in preaching in New York, was acting well within his legal rights. Notwithstanding his acquittal, his bail was not discharged until he had paid the whole cost of the prosecution, amounting to the sum of eighty-three pounds, seven shillings and six pence.”