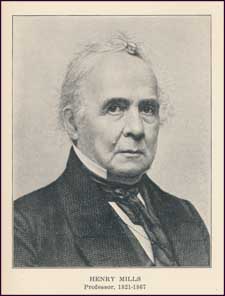 Beginning this post with an old line from a television detective drama back in the day, the bare facts are indeed about all we have for today’s post about the Rev. Dr. Henry Mills. Born this day on March 12, 1786 in Morristown, New Jersey, information about that birth, his parents, and the circumstances of his growing up days are absent. The only bit of information next is that he was a student at the College of New Jersey in Princeton, New Jersey, graduating in 1802. [The College was renamed Princeton University in 1896].

So it was that Henry Mills graduated from the College just ten years before the Princeton Theological Seminary was established. The president of the College of New Jersey at that time was Samuel Stanhope Smith. The school’s first president had been John Witherspoon, with Samuel S. Smith among the first graduating class when Witherspoon was president. Further, Samuel Smith married John Witherspoon’s daughter. Smith’s ministry after that graduation and marriage was that of being a missionary, a pastor, and the first president of what is today Hampden-Sydney College. With this background, he returned to the College of New Jersey in Princeton in 1779. He is particularly noted for having strengthened the academic life of the college with the appointment of qualified men as professors. Thus in his own training, Henry Mills had the great benefit of well-established professors at the College.

Following graduation, Mills taught and tutored for a number of years before being called into the ministry. In that era, men often prepared for the ministry under the tutelage of a single pastor. Mill’s choice of mentor was that of the Rev. James Richards, who had just left his pastorate at the First Presbyterian Church in Morristown, New Jersey. Evidently he chose well and his training was to good effect, for in 1816 the Presbytery of New Jersey ordained Henry Mills and installed him as pastor of the Woodbridge Presbyterian Church, and there he remained for the next six years.

Another feature of that era, you will almost consistently find that men who were called to the ministry would wait until they were ordained and installed as the pastor of a church before they would consider taking a wife. And if the situation at that first church was at all tenuous, they might wait even longer. And so we find that Rev. Mills was married in 1821 precisely at the point when he left the pastorate and was appointed to be the Professor of Biblical Criticism and Oriental Languages at a new seminary called Auburn Theological Seminary. He taught there for thirty-one years. Retiring from his teaching position in 1854, he was accorded standing as professor emeritus up until his death on June 10, 1867.

Besides being a theological professor, he was also a hymn writer. Most of his hymns were taken from German hymns, which he thought the American church needed to hear and sing. One volume was published from his pen, titled Hymns from the German (1845). However, though the book did see a second edition in 1856, still none of these hymns appear to have remained in use, and so these have passed from the church scene today.

Words to Live By:
If we were to list the number of ministers who have come and gone without any great notice by the visible church except to note their birth dates, years and place of training, some bare record of what churches or schools they were at, and the date of their death, the list would be unending. The great majority of God’s servants fall into this category. Perhaps you, reader, fall into this listing.  Unnoticed by the world, not mentioned by denominational magazines, your name would be one such pastor or teacher. But . . . but, there is another record being written which is of greater importance.  Found in Malachi 3:16 – 17, the prophet writes, “Then those who feared the LORD spoke with one another. The LORD paid attention and heard them, and a book of remembrance was written before him who feared the LORD and esteemed his name. They shall be mind, says the LORD of hosts, in the day when I make up my treasured possession, and I will spare them as a man spares his son who serves him.” Faithful Christian: be glad that you are found in His heavenly book of remembrance rather than simply in some earthly book. His book is what matters in the long run, indeed for eternity.

A More Personal Insight to the man:
In the above referenced history of the seminary, there is this interesting comment on Dr. Mills’ character:

It is said that cases of discipline of the students were generally referred to him for settlement, and there came a time when the other members of the Faculty felt that he did not deal seriously enough with them so that again and again they took him to task for too great frivolity or leniency in his relations with them. It had no effect, however, for he could quickly turn the edge of his colleagues’ criticisms with a humorous reply, and serious dealing with him became increasingly difficult. He was greatly beloved by his colleagues and many friends and his students.—A History of Auburn Theological Seminary, p. 77.