The Semi Centenary of Dr. Hodge. 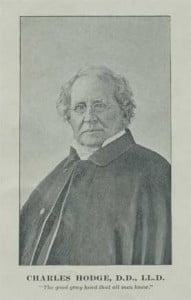 The completion of the fiftieth year of the professorship of Rev. Charles Hodge, D.D., will be celebrated in Princeton, N.J. on Wednesday, the 24th of April. All friends and former students of Princeton Theological Seminary, and the public generally are invited to be present. The exercises will begin at 11 A.M., with an address by the Rev. Joseph T. Dwyer, D.D., of Brooklyn, N.Y. This will be followed by a meeting of the alumni and the organization of an alumni association after which will be an alumni dinner. In the evening a public reception will be given at the house of Dr. Hodge, and the seminary buildings will be illuminated.

The following resolution in relation to this subject was adopted at a meeting of the alumni of the seminary last June:

Resolved, That the proposed celebration of the semi-centennial of Dr. Hodge meets our hearty concurrence, and we cordially unite with the Directors in inviting the friends and former students of the seminary to meet for this purpose in Princeton, on Wednesday, April 24, 1872; and that this invitation be very particularly extended to all our brethren in different Christian denominations, and in every section of our country, as well as in foreign lands, who have received their education where in whole or in part. And we express the earnest hope that the hallowed memories of the past, personal attachments, and local and literary associations with this cherished spot, may be permitted to overcome the long and wide separation of time and place,e and ecclesiastical organization, so that we may all upon this glad occasion gather around the instructor whom we all love and revere, a band of brethren, cemented in Christian love, renewing and pledging a mutual confidence and affection which nothing in the past shall be suffered to dim or to obliterate, and nothing in the future shall be permitted to disturb.

Words to Live By:
What made Charles Hodge great? Why is he so well remembered by Presbyterian historians and others? Certainly he was not without his flaws. But what made him great? Was it native intelligence? Was he simply smarter than most others? Or was it his steadfast adherence to the orthodox tenets of the Reformed faith? Clearly that was in his favor. But in the end, it is the Lord who gifts, empowers and uses men and women as He sovereignly moves history ahead according to His great plan. Time and again the Lord raises up the right people at the right time and in the right place to accomplish His will. Our place is to be faithful, doing the will of God as discovered in His Word. If we are to be greatly used in the Lord’s kingdom, He will bring that to pass in His time. We praise God for how He used Hodge, but the glory for all that Hodge accomplished belongs to the Lord and not to Hodge.