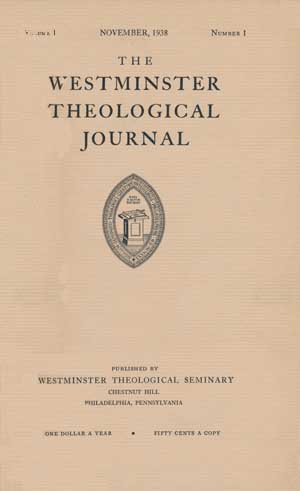 The PCA Historical Center was recently blessed with accession of the first four issues of THE WESTMINSTER THEOLOGICAL JOURNAL (1938-1940). As you might imagine, these issues are rather scarce, and we’re pleased to be able to add them to our research library. Still missing from our collection are Volumes 3 through 17 (1940-1954), but Lord willing, in time we hope to find these as well.

That accession prompts our post today, and lacking a specific date in this instance, let’s just say that it was probably in that first week of the month, maybe around November 6, in 1938, when pastors, elders and interested laymen would have gone to their mailboxes and found waiting for them the first issue of THE WESTMINSTER THEOLOGICAL JOURNAL. That first issue—Volume 1, number 1—bears the date of November 1938. Seventy-seven years later, the JOURNAL continues in its mission. That mission was clearly stated on the opening pages of that first issue, and as both the Seminary and its JOURNAL have played an important part in the conservative Presbyterian movement of the 20th and 21st centuries, it seems relevant to present our readers with the commitments, hopes and intentions laid out by the editors at that time :

If we are not mistaken (and editors, like others, sometimes make mistakes), more periodicals are dying than are being born at the present time. The Westminster Theological Journal in sending out its first issue is, therefore, going against the current of the times. It is doing that in a more important sense, however, than merely by the fact of publication. The Journal is founded upon the conviction that the Holy Scriptures are the word of God, the only infallible rule of faith and of practice, and that the system of belief commonly designated the Reformed Faith is the purest and most consistent formulation and expression of the system of truth set forth in the Holy Scriptures.

This position is the position of the Faculty of Westminster Theological Seminary, and the Journal is edited by two members of that Faculty on behalf of the entire body.

We stand today in the Christian Church as debtors to nineteen centuries of Christian history, thought, and experience. It would not only be futile but wrong to try to dissociate ourselves from the great stream of Christian tradition. Other men laboured and we have entered into their labours. It is only by thorough acquaintance with and appreciation of the labours of God’s servants in the centuries that have passed that we can intelligently and adequately present the Christian Faith in the present.

But while we cling tenaciously to the heritage that comes to us from the past we must ever remember that it is our responsibility to present the Christian Faith in the context of the present. The position we maintain, therefore, necessarily involves the bringing of every form of thought that may reasonably come within the purview of a theological acuity to the touchstone of Holy Scripture and the defining of its relations to our Christian Faith.

The need for a scholarly theological journal in this country to uphold historic Christianity is very great. Certain periodicals that at one time supplied this need have ceased to exist. Into the breach The Westminster Theological Journal aims to enter.

The policy of the Journal will be:
1. To maintain the highest standard of scholarship;
2. To publish contributions which will promote the study of theology and the interests of the Reformed Faith;
3. To publish reviews of current literature of importance to the Christian Church and to theological study.

The Faculty is undertaking this task with humility and confidence. They do so with humility because they are aware of the responsibility and of their own insufficiency. Yet they do it with confidence because they believe they are on the side of the truth, and in reliance upon divine grace and power. The battle is the Lord’s, and as His is the wisdom and strength so to Him shall be all the glory.

[Note: Professors Paul Woolley and John Murray served as editors of the JOURNAL from 1938 until May 1953, at which time Murray resigned. Woolley continued, first as editor and later as managing editor, until May 1967.]

Pictured below: The inside of the front cover, showing the contents of Volume 1, number 1 (November 1938). The Stonehouse article was a print version of his inaugural lecture, upon installation as Professor of New Testament. — 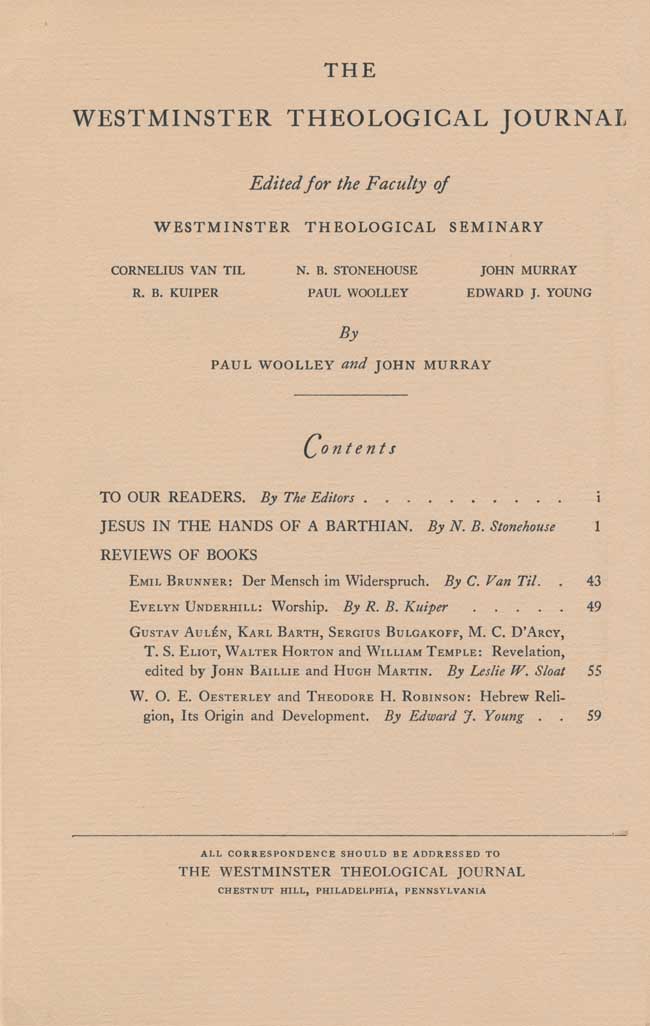