The Bishop of All Beyond
by Rev. David T. Myers 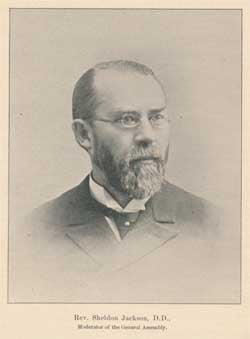 Our title is most curious indeed. And yet Shelton Jackson was rightly given this nickname, to indicate that he in his long ministry of missionary service and after at least a million miles of travel, was indeed a true spiritual overseer for the Lord Jesus, in accord with biblical Presbyterianism. Long time readers of these posts will remember this present author wrote on him in our first year of posting Presbyterian persons, places, and events on this same date in 2012. And yet there is so much more information that we now wish to write another post about him.

Born on September 18, 1834 in Mohawk Valley, New York, this Princeton Seminary graduate of 1858 was ordained one year later by the Presbyterian Church, marrying his wife Mary Vorhees that same year. At first, they thought that foreign missionary service was their calling, but the Presbyterian Board for Foreign Missions turned them down due to his physical shortcomings, including his five foot height. He was instead directed to serve stateside. Even here, Jackson’s first call to ministry, among the Choctaw Indians in the Oklahoma Territory, was curtailed for exactly that reason, poor health. But over time, he so prevailed that the record of his service for the Savior was rendered with such great spiritual success that physical constraints are all but missing in the record.

Based in Denver, Colorado, Jackson became the Presbyterian mission superintendent for … get this readers … for Colorado, Wyoming, Montana, Utah Territory, Arizona Territory, and New Mexico Territory. Oh yes, we add Minnesota too. Using the printed page, he was the editor of the Rocky Mountain Presbyterian, a denominational newspaper. He would use the great westward expansion of the Union Pacific railroad to wins souls to Christ and begin mission churches in all the towns to which that railroad would go. How does the number eight hundred plus congregations stack up in your sanctified thinking as to the success of his church planting work! And many of these churches still exist!

A friend once said of him that he would not hesitate if he thought he could save an old-hardened sinner, to mount a locomotive and let fly a Gospel message at a group by the wayside while going at a speed of forty miles an hour!

Of course, his greatest work of church building and service came up in the new territory of Alaska, of which we wrote extensively in our first post back on September 18, 2012. You can read it there, to add to your thanksgiving to God for the spiritual gifts given to this man by the Holy Spirit.

Words to Live By:
It was said that his Christian parents dedicated him to God at the age of four. Does not this spiritual act of setting him aside for God explain to us the wide opportunities for God’s service in his life? Let us as Christian parents train up our children in the way they should go. (Proverbs 22:6)

In Sheldon Jackson’s life, he set his heart and mind from his earliest days to be a servant of the Lord Jesus. Let us pray that our covenant children would follow his example as we live and instruct them in the worship and work of the Gospel.