A Near-Sighted Man with a Great Vision. 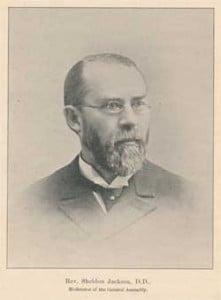 The seals and the whales in Alaska were disappearing fast for the native people up in Alaska.  So the Rev. Sheldon Jackson, a Presbyterian missionary, traveled to Siberia to purchase reindeer to be introduced in Alaska for food, clothing, and transportation.  He would eventually bring over 1300 of them, and train the natives how to care for them.

Sheldon Jackson was born on May 19, 1834 in Minaville, Montgomery county, New York, the only son of Samuel Clinton Jackson and his wife Delia (Sheldon) Jackson. He graduated from Union College in 1855, prepared for ministry at Princeton Theological Seminary, taking the full three year curriculum and graduating in 1858. He had been licensed to preach by the Presbytery of Albany in 1857 and was ordained by the same Presbytery on May 5th, 1858.

Wasting no time, Rev. Jackson was married to Mary Voorhees on May 18th, 1858, and immediately they applied to the Presbyterian Foreign Mission board for passage in Siam or Columbia, but we turned down—get this!—for “lacking in physique.”  Jackson was only five feet tall.