Are We Guilty of Unbelief? 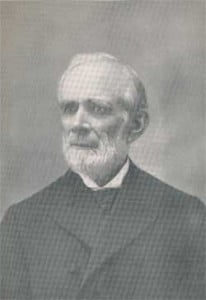 Surprising things turn up when searching the calendar, day by day, for anything Presbyterian. In this case, a sermon by the Rev. Dr. William Henry Green, a Hebrew scholar who, from 1851 until his death in 1900, served as Professor of Biblical Literature at the Princeton Theological Seminary. In its historical context, this sermon was delivered on the very eve of the American civil war, yet the words bear a striking pertinence to our situation today. Indeed, as Dr. Green himself points out, the words of his text in Isaiah 49 apply in every instance where the Church has found herself in times of distress. Green’s sermon rests on the understanding that believing Israel in the Old Testament is the Church more fully revealed in the New Testament. From that basis, he goes on to show that God chose the Church as His instrument for the propagation of the Gospel, and the means that God has chosen will not fail in accomplishing His purposes, not because the Church is sufficient, but because God Himself is sufficient and never-failing.

A sermon by the Rev. W. Henry Green … preached in the University Place Church, New York, on Sabbath evening, May 5, 1861 : in behalf of the Board of Foreign Missions of the Presbyterian Church.

A new torrent of emotions is rushing through the American heart. The inexorable logic of events has thrust before us the ruin of our beloved country as a contingency that is possible, perhaps even probable, and at our very doors.

The occurrences of the last few weeks have prepared us to appreciate better than we could have done before the feelings awakened in a devout Jew by the prediction of the coming Babylonish exile. It was not only his patriotism which was touched by the ruin coming on his country, but his religious emotions were stirred to their very depths. His patriotism was entwined with his religion. The land that he loved was the Lord’s land. The nation to which he belonged had been chosen by God from all the families of mankind to be His peculiar people. It was their mission to perpetuate and to spread throughout the world the knowledge of the true religion, and thus all nations were to be blessed in them. Jerusalem, the royal capital, was the city of the great King, where He had fixed His earthly dwelling-place; it was the only spot on earth where those atoning sacrifices could be offered, by which God was propitiated, and which were permanent types and pledges of the future more perfect sacrifice. And now shall Israel be cast off, the holy land be ravaged, Jerusalem destroyed, and the temple burned? Are then God’s purposes of grace annulled? Is the end of Israel’s existence defeated? And are the glorious hopes which had been indulged, of blessings to come forth from them upon the world, doomed to sudden and bitter disappointment?

The prophet meets and answers these gloomy apprehensions in the text. Israel has been guilty, and a period of severe chastisement and trial is before him. But God has not forsaken him, nor are the ancient promises forgotten. The Lord still says to His sinful, suffering people, and may He in His sovereign grace vouchsafe a like word of mercy to our own afflicted land, “Thou are my servant, O Israel, in whom I will be glorified.”

It is obvious that these words of consolation and encouragement contain nothing of a local or temporary nature. They are not directed exclusively, nor even peculiarly to that particular distress, which gave occasion to their utterance, but are equally adapted to every similar source of disquietude or anxiety that may disturb the people of God. They describe the divinely ordained mission of God’s chosen people. And that is a fact for all time. If we were to confine our attention on the one hand to the Church’s want of fidelity to the trust committed to her, her worldliness, her feeble faith, her flagging zeal, her intestine strifes, her imperfect consecration and the low state of her piety; or, on the other hand, to her weakness as compared with the obstacles I her way, the vastness of the work to be performed, or the power of those agencies and influences which are hostile to her welfare and her progress, we might easily give way to despondency and feel as though the world’s salvation could never be achieved by such an incompetent and unworthy instrument. In fact, we can only escape this conclusion by directing our eyes to some such ground of confidence as that contained in the text, which is independent of all external circumstances, which rests not upon the constancy or the efficiency of the Church, but is based entirely upon the changeless purpose of an unchanging God. With this view let us turn our thoughts to this universal antidote to discouragement in the work in which the Church is engaged.

I. The first consideration which presents itself, is that the Church has been taken by God into His service. “Thou art my servant, O Israel.” This carries with it a sure pledge of the accomplishment of the task, whatever it be, to which the Church is appointed. If the Church had undertaken some work of her own motion, the case would be different. We would then have to weigh carefully the reasons for and against her success. It would be a question, whether she with her ten thousand could meet and vanquish the enemy that comes against her with twenty thousand,—whether she contains within herself a strength and resources adequate to the enterprise. But if she is in the service of the Almighty, and not working on her own account, these considerations are irrelevant and vain. The workman is furnished with means and facilities by his employer. If a palace be building, the question of its completion rests not upon the scanty resources of the laborers engaged, but upon the wealth of the royal treasury. They who do the work of God are privileged and expected to draw upon His inexhaustible supplies. Whatever the task He has appointed them, He will provide all that is requisite for its accomplishment. It is His power and grace that are pledged for the issue. . . .

Furthermore, if the Church is the Lord’s servant, working out His ideas and not her own, then, and then only can she be certain that what she is doing is in harmony with His universal plan. God is the supreme director of all things. He guides or controls the movements of all His creatures, so that they combine to effect His predestined end. All things work together to bring about what He has purposed. This is not only to be regarded as the certain resultant of conflicting forces operating in the sphere of the world or of the universe; as though some were favorable and others adverse, yet the latter should be overbalanced by the former. But every thing that occurs conspires to urge forward God’s grand design. There is nothing, and there can be nothing, which is, properly speaking, adverse to it. That which so appears to our narrow vision, would, if we could take a more comprehensive view, be seen to enter as a constituent into the plan, and to contribute its quota to the general design. Now, if the plan upon which the Church is engaged is God’s plan, then it is certainly in harmony with His universal scheme. It will fit in with the rest of His glorious designs, and the whole momentum of this divine machinery is given to propel it forward. On the other hand, any plan not in accordance with this grand universal scheme must inevitably be thwarted, for it runs counter to movements which God has instituted; and it relies for its strength and support upon materials which the Creator designs to subserve a totally different end from that to which it would turn them.

Then too, if God has selected the Church to be His servant in a given work, this is because she is or shall be made a fit instrument for what He designs her to do.. For every function to be performed in nature He has an appropriate agent, which accomplishes precisely what it was intended to accomplish. It is the same in the moral and spiritual world. He selects His own instruments and they are just the ones for His purpose. His ways, it is true, are not as our ways, nor His thoughts as our thoughts. If we had been called upon to choose an agency for spreading the gospel over the earth, we certainly would never have thought of selecting one which would slumber over its task as the Church has done, or which would be chargeable with such criminal inconsistencies and such shameful neglects of duty. And yet these blots upon the Church, though they may well cover her with confusion, so far from defeating God’s design, or proving that so incompetent an instrument must hinder its accomplishment, only show how comprehensive that design must be, that He should make choice of such an instrument to effect it. If nothing more were to be done than to send the gospel over the earth, this could be brought about much more speedily than by our laggard efforts. It would be a profitable though humbling task to search out those enlarged views of the design of God, which are suggested by His selection of so weak and sinful an agent as the one best suited to accomplish it. Assuredly it stains all human pride and glorying, and reveals the magnitude of the work of salvation, and renders the ultimate triumph of sovereign grace more illustrious.

Nevertheless, this inevitably follows. The plan of God in the salvation of men cannot be defeated by the unfaithfulness or the incompetency of the Church as His instrument in spreading the gospel. Because her seeming unsuitableness, sinful and inexcusable as it is, is really part of her fitness, when the full comprehensiveness of God’s plan is regarded. He selected the Church, knowing precisely what she was and would be, to be His servant, and nothing can ever occur to disprove the wisdom of this choice. . . .

To read the whole of Rev. Green’s sermon, click here.