Our guest author, Dr. David W. Hall, has set himself a difficult task today in considering this sermon by the Rev. Benjamin M. Palmer. Looking past the grievous aspects of this sermon, namely Palmer’s brief defense of race-based slavery, we have here an effort to discover what profit there might be in this sermon, to sift it such that we can consider Palmer’s argument apart from what would otherwise cause us to cast it aside, unread. This presentation also puts a high demand upon the reader, to engage with our author in considering a work that would otherwise be most disagreeable. And ultimately, we also have to grapple with the question of how could men like Palmer, who knew the Scriptures far better than most today, and who spoke so convincingly of their faith in Christ as Savior and Lord, still be so wrong on such a rudimentary issue? How too do we avoid the sin of pride in thinking ourselves superior? Were these deeply flawed men alive today, would they be aghast at how we live our lives while claiming the name of Christian? 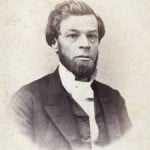 The impressive pastor in the West in the mid-19th century was Benjamin Morgan Palmer (1818-1902). He had been trained at Amherst, the University of Georgia, and Columbia SC) Theological Seminary. Prior to moving to New Orleans in 1856 (until his death in 1902), Palmer had pastored in Savannah and Charleston (1843-1856) at large churches. Palmer, the Pastor of the First Presbyterian Church in New Orleans, LA, preached this sermon on a Fast Day declared by the Confederate States in 1861.

He viewed a day of fasting and repenting as both biblical and necessary. Selecting 2 Chronicles 6:34 as his text, he obviously thought that the American south was in a position parallel to the earlier Hebrew republic, employing raw language from the outset: “Our late Confederates, denying us the right of self-government, have appealed to the sword and threaten to extinguish this right in our blood. Eleven tribes sought to go forth in peace from the house of political bondage: but the heart of our modern Pharaoh is hardened, that he will not let Israel go.” Not only was the sectarian division grievous to Palmer, but he also called for repentance for intemperance, Sabbath-breaking, and other sins.

His message was thus divided into these headers.

Whether one agrees with all aspects of this interpretation or not, the rhetoric was stirring.

In conclusion, permit me to say that the present is by far the most important and glorious struggle through which the nation has ever passed. The parallel which has been drawn between it and the contest of the Revolution has not been seen in its full significance by many even of those who have suggested it; certainly not by those who have derided it in terms of measureless contempt. The principles involved in this conflict are broader and deeper than those which underlay that of the Revolution, rendering it of far greater significance to us and to our posterity and to mankind at large. Our fathers fought for no abstract rights as men, but for chartered rights as Englishmen. They claimed that the fundamental principle of English liberty was invaded, when the Colonies were taxed without representation. They were abundantly able to pay the duty which was stamped upon the Royal paper, and the tax levied upon the tea which they threw into the harbor of Boston: but they were not able to submit to any infraction of their Constitutional rights.

Palmer admired those who “resisted unto blood,” and made this distinction: “But our Revolution rests upon the broader principle laid as the corner stone of the American Constitution: ‘that governments derive their just powers from the consent of the governed; and that whenever any form of government becomes destructive of the ends for which it was formed, it is the right of the People to alter, or to abolish it, and to institute a new government, organizing its powers in such form as to them shall seem most likely to effect their safety and happiness.’

The crucial issue of the day, as he saw it, “which now unites our whole population as the heart of one man, is whether ten millions of people have not the inherent right to institute such a government, ‘as to them shall seem most likely to secure their safety and happiness.’” Palmer asserted that the denial of that self-government “lays the foundation of a despotism under which we cannot consent to live, for it was distinctly repudiated in the Declaration of 1776.”

His wording was designed to stir the souls of his listeners:

We should be unworthy of our Fathers, if we flinched from maintaining to the last extremity the one, great, cardinal principle of American constitutional freedom. I could perhaps manage to live, if Providence had so ordained, under the despotism of the Czar, for it is not wholly irresponsible: the order of the Nobles would be interposed between me and the absolute will of the Autocrat. I could perhaps submit even to the Turk; for he is held in check by fear of his own Janizaries. But I will not—so help me God!—I never will submit to the despotism of the mob. It is not the occupant of the White House who is the tyrant of today; but the starving millions behind the throne. Hence the wild outburst of revenge and hate, which now astonishes the world. . . . May a merciful God help them of the North! They have sowed the wind, they must reap the whirlwind. They cannot retrieve the past, they must drive on and meet the future: perhaps to experience the fate of Acteon, and be eaten up by their own hounds.

Palmer, while lamenting the division of the nation into two states was not surprised in view of the preceding half century of legislative and political struggle. Further sounding the good predestinarian that he was, Palmer concluded: “The separation of North and South was as surely decreed of God, and has as certainly been accomplished by the outworking of great moral causes, as was the separation of the Colonies from their English mother; as the genesis of the modern nations of Europe, out of the destruction of ancient Rome. In effecting this separation, the most glorious opportunity has been missed of demonstrating the power of our Republican principles, the progress of American civilization, and the effective control of the Gospel over human passions. In past ages, the sword has been the universal arbiter, and every issue has been submitted to the ordeal of battle.”

This Fast day sermon is available online at: http://cdm.bostonathenaeum.org/cdm/ref/collection/p16057coll14/id/87325. It is also published in my 2012 Election Sermons on Kindle.

Taken from Twenty Messages to Consider Before Voting