A Message From a Yankee

Written on the walls of the old church during the War Between the States was the following: “Citizens of this community.  Please excuse us for defacing your house of worship.  It was absolutely necessary to effect a crossing over the creek.  The Rebs had destroyed the bridge.  –A Yankee.”  Well, at least, they now knew after the invasion of Union troops in their area near the Old Brick Church,  who was responsible for tearing up the floor of their sanctuary. 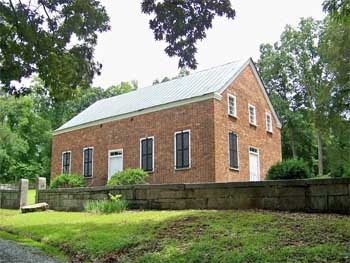 The Old Brick Church, or more properly the Ebenezer Associated Reformed Presbyterian Church (sometimes called the First Associate Reformed Presbyterian Church), had been established in 1770 in Fairfield County, South Carolina, near the town of Jenkinsville, South Carolina.  Scotch-Irish Presbyterian settlers had moved south from the Cumberland County of Pennsylvania to the area to establish up their homes and families in the area.  At first, they worshiped in a log church.  This was replaced in 1788 by a brick church which continues to this day in the area.

Five pastors ministered the Word of God from 1791 to 1899.  They were: James Rogers (1791 – 1830), James Boyce (1832 – 1843), Thomas Ketching (1743 – 1752), C.B. Betts (1755 – 1769), and Allen Kirkpatrick (1896 – 1899)  During this time span,   it became the “mother church” of the Associate Reformed Presbyterian Synod in South Carolina, as other A.R.P. congregations met together to organize as a Synod inside its four walls.  While it is one of a very few which still exists from the eighteenth century in South Carolina, yet the time of the Civil War when many of its sons went off to fight for the Confederacy brought the death knell to the church.  There was some attempt to revive it after 1899, but eventually it was closed due to lack of attendance.

On August 19, 1971, it was placed on the National Register of Historic Places. In 1973, the local Presbytery of the Associated Reformed Church placed it back on its rolls as a house of worship, even though there is no congregation or pastor currently serving it.  Currently, usage is restricted to commemorative events which take place at the property.

Words to live by:
Special places of remembrance are highly important to recognize the faith and life of godly men and women and covenant children of  past ages, who made it a priority to worship the Triune God of the Bible in spirit and in truth.  What would be more important however would be to have a living place of worship, with an active congregation and faithful minister to speak to the twenty-first century citizens and church members  with the same message of salvation as was declared in  past centuries.  Pray that the Lord will thrust out laborers into His vineyard, for the fields continue to be white unto spiritual harvest.

Image source: Photograph by Michael Miller, posted at http://landmarkhunter.com/126794-ebenezer-associate-reformed-presbyterian-church/ and also at http://www.panoramio.com/photo/92552837