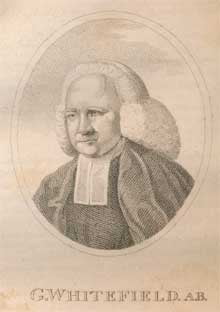 The idea of unlimited submission to unjust government, especially to foreign British rule, was ablaze in America several generations prior to the revolution. Even the leading British evangelist of the Great Awakening, having come to America, weighed in on the subject. In a 1746 sermon, George Whitefield (1714-1770) invoked the same vocabulary as the earlier Reformers in speaking of the ruler as “a nursing Father of the church.” His Britain’s Mercies and Britain’s Duty exulted in “Protestant powers” as tokens of blessing given by the King of Kings.[1] Whitefield considered England blessed in having no “popish abjured pretender.” Employing the terminology of the Hebrew Psalter, he said, “if the Lord had not been on our side, Great Britain, not to say America, would, in a few weeks, or months, have been an Aceldama, a field of blood.” Had the “popish pretender” succeeded, Britain would not have been ruled by parliament but by “Arbitrary principles . . . sucked in with his mother’s milk.”[2] Whitefield also viewed his Protestant people as under obligation to hold fast to God’s commands. Like Mayhew, he stated that citizens were not obligated to submit to an unjust government.

But the chasm between Enlightenment conceptions of law and God’s law remained vast. There could be no progress in the future, and the classical models were disdained. Whitefield viewed God’s law as unimproveable, challenging: “Tell me, ye men of letters,” he asked, “whether Lycurgus or Solon, Pythagoras or Plato, Aristotle, Seneca, Cicero, or all the ancient lawgivers and heathen moralists, put them all together, ever published a system of ethicks, any way worthy to be compared with the glorious system laid down” in Scripture.[3]

Had the Lord not providentially spared England from theological error, Whitefield thought the universities would have been ruined and pulpits filled with “freewill” and other antichristian doctrines. Protestant charity and influence would have diminished to the levels of impoverished England. Whitefield also associated the tyranny of Arminianism with a theology that worshipped classical idols like Diana and adored “unassisted unenlightened reason.” Like Calvin before him, Whitefield saw God at work throughout British history. He ascribed a military victory in England to the fasting and prayer of repentant Scottish ministers.

Whitefield, contrary to John Wesley, supported the independence of America. On one occasion, he even warned against English efforts to impose a bishop on North America. Prior to leaving America at the end of a 1764 crusade, Whitefield the Calvinist warned his spiritual compatriots that his heart bled for America. “O poor New England!” he exclaimed, “There is a deep laid plot against your civil and religious liberties, and they will be lost. Your golden days are at an end. . . . Your liberties will be lost.”[4] The cause of his fear was that Anglicans hoped to quell American independence by setting up a bishopric in America. That fear, combined with the outrage against the Stamp Act, which followed shortly thereafter, fired American attitudes against Britain even more. Whitefield, it turned out, was more loyal to Calvinism than to his British monarch; and he expected the worst.

Whitefield retained a great respect for America until the end of his life in 1770. This British Calvinist was eventually buried in an expatriate grave in Newburyport, Massachusetts. It is little wonder that he was still revered at the outset of the Revolutionary war. On one occasion, when a New England militia had set out on a disastrous attempt to invade Quebec, its commander, Benedict Arnold, prior to his traitor days, searched for a Holy Grail to encourage his soldiers. He led his officers down into the crypt where Whitefield’s remains lay. The officers stripped off Whitefield’s clerical collar and wristbands and distributed pieces of these relics to the soldiers as tokens of blessing. James H. Hutson observes of this episode: “The distribution of the Great amulets showed in its eerie way that men facing stress and anxiety wanted links to a preacher of a living God . . . One need look no farther for the reason evangelicalism demolished deism.”[5] Within weeks of his death, scores of memorial services were held for this British Calvinist who evangelized America.[6]

Like so many of these grandchildren of Calvin, he kept Genevan ideas alive and applied them to the American context. Stan Evans writes that American founders “faced the task of establishing a new political order of their own, rather than escaping one controlled by Whitehall; yet the concerns expressed about human frailty, and political power, continued exactly as before. Virtually everyone in our politics, it appears, was a believer in Original Sin, wherever he stood on the specific issues of the day. Simply reading statements on this topic, without other means of identification, one would have no idea at all as to what party or interest was being promoted.”[7] Many of the founders of modern western democracies were children of the Calvinist Reformation, not the Enlightenment Revolution.

[2] Ellis Sandoz, ed., Political Sermons of the American Founding Era, 1730-1805 (Indianapolis: Liberty Press, 1991), 126. Whitefield detested the Arminian inroads to the Anglican Communion as heretical departures from Calvinism. His revival sermons were little more than “rehearsals of traditional Calvinist doctrine.” Alan Heimert, Religion and the American Mind (Cambridge, MA: Harvard University Press), 1966, 37. He insisted that “the constant Tenour of my preaching in America has been Calvinistical.” Idem. Non-Calvinist ministers were fearful of his emphasis on “Calvinistic Principles and [the] Doctrines of Grace.”