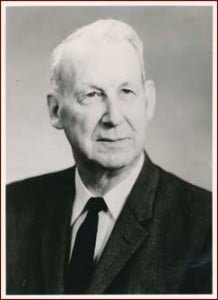 There is however something unique about the Rev. C. Darby Fulton that makes you want to know more about the man. He was widely typified as a Christian statesman. One way in which he demonstrated that quality of character was in the fact that, while he did not choose to come into the Presbyterian Church in America at its formation in 1973, he nonetheless was quite willing to bring a message during the PCA’s first General Assembly. [The text of his address is provided below]. Some conservatives who chose not to come into the PCA ignored or even opposed the new denomination. Darby Fulton was different, and that difference is part of what marks him out as a true Christian statesman. It’s part of what makes you want to know more about the true character of the man.

Paul interpreted every phase of his life in its relation to Christ. When he rejoiced, it was in Christ; he gloried in Christ; he conquered in Christ; he was strong in Christ; and he took pleasure in weaknesses, in injuries, in necessities, in persecutions and distresses for Christ’s sake. For him, to live was Christ.  END_OF_DOCUMENT_TOKEN_TO_BE_REPLACED