They said that the Presbyterian Church of America which began in 1936 had been ”a false start.”  Issues regarding  the exact details associated with Christ’s second coming as well as the total abstention from alcoholic beverages formed a divisive wedge between once united brothers in Christ.   The place of independent agencies in the new church versus denomination agencies added another issue to the contention of “a false start” in the Presbyterian Church of America.  Some would even argue that the death of J. Gresham Machen was a blow to the original testimony.  But whatever it was, in 1937, a small group of ministers and ruling elders had gathered in another place from the General Assembly then meeting to set up the rules for association for a new church. 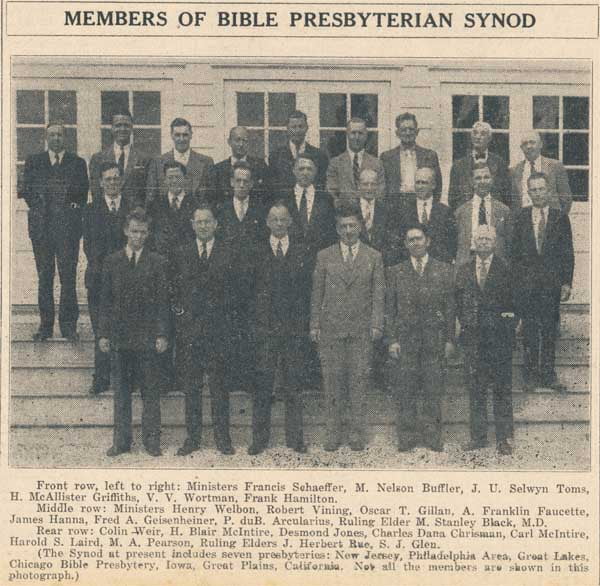 Some of its original ministers were individuals who had and would have a testimony in present and future years.  They were: Francis A Schaeffer [in the above photo, he is the first man on the left, in the front row], H. McAllister Griffiths, Carl McIntire, Harold S Laird, Oliver Buswell, Allan MacRae, Charles Dana Chrisman, A. Franklyn Faucette, J. A. Toms, and others.  J. A. Toms was elected moderator, and H. McAllister Griffiths was elected the Stated Clerk.  Those who had suffered censure in various degrees by the Presbyterian Church in the U.S.A. were absolved of all such censure.

Coverage of the First General Synod of the Bible Presbyterian Church was provided on the pages of The Christian Beacon, in its September 15, 1938 issue. To view the entirety of that issue as a PDF scan, click here.