Our post today focuses on the life and ministry of the Rev. Francis McFarland, with an obituary published on the pages of THE CHRISTIAN OBSERVER late in 1871. 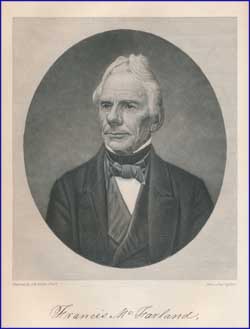 The life, labors and character of this eminently useful servant of Christ, whose death was briefly noticed in our columns three weeks since, are worthy of a memorial which will long be cherished as a rich legacy to the Church. The sketch presented in the following paragraphs contains the principal incidents of his life, given by the editor of the Central Presbyterian:

“He was born in the south of Ireland, in the province of Ulster, in January, 1788. When he was five years old, in 1793, his parents emigrated to this country and settled in Western Pennsylvania. He was graduated at Jefferson and Washington College in 1818, and shortly after entered Princeton Theological Seminary, where he was a fellow-student with Rev. Drs. Charles Hodge, Wm. B. Sprague, Joseph Smith and Bishop Johns. In a communication written when he was more than eighty years of age, he says:

‘I regard it as one of the kindest dispensations of Divine Providence towards me, that I was led to that institution where I enjoyed the esteem of those wise and holy men, Dr. Archibald Alexander and Dr. Samuel Miller, then the only Professors in the institution, and who honored me with their friendship as long as they lived.’

He was licensed to preach the gospel by the Presbytery of New Brunswick in October, 1819; and in 1829 he was appointed a missionary by the Assembly’s Board to labor in Indiana and Missouri. He then spent three months preaching to the First Presbyterian church, Brooklyn, N.Y., then recently organized. While laboring there, he was (August 1, 1822) ordained sine titulo, by the Presbytery of New Brunswick. In the fall of that year he had a severe attack of typhus fever accompanied with hemorrhage from the lungs, in consequence of which, as soon as partially recovered, he was advised by his physician to travel to the South on horseback.

Accordingly, he proceeded to Staunton, Va., “where he was the guest of that noble Christian gentleman, and eminent physician, Dr. Addison Waddell, for whom he ever cherished the highest regard.” His health being greatly improved, he was invited to preach in the church of Bethel, then vacant. After supplying the pulpit for three Sabbaths, he received a unanimous call from that congregation to become their pastor. This call he accepted, and in the year following was duly installed, the Rev. Dr. Ruffner preaching the sermon, and Rev. Dr. Speece delivering the “charge.”

He resigned his pastoral office to enter upon the duties of Secretary of Education, in March, 1836, to which he was apppointed the preceding year. He continued in the services of this Board, which were highly appreciated, till August, 1841, when, having been called to his old charge, he returned to his home among the people of the Bethel congregation. As the Presbyterian remarks, “He was for many years a man of very infirm health. His afflictions from asthma was t times very distressing. He seldom knew the luxury of uninterrupted sleep, the only posture of rest was in a chair. It was a constant wonder to his friends that long ago both body and mind did not sink under the pressure of disease. But in the midst of growing infirmities his labors were continued till about five years ago, they were relieved by the settlement of the Rev. Jas. Murray as collegiate pastor. Having lived to welcome this brother (between whom and himself there was a relation of constant harmony and affection) his pastoral work ceased. He was almost constantly confined to his home for years past, and much of the time to his couch. About a year ago, Mrs. McFarland was called to the heavenly home before him. He most patiently waited all his appointed days tills his own change should come.

“His end, which he had been long expecting, was in ‘perfect peace,’ and was announced by the Rev. Mr. Murray in a brief note written on October 10, 1871. ‘He breathed his last this morning about five o’clock, in his sleep, in the 84th year of his age. Thus, he was spared all consciousness of the death struggle, and indeed all pain in the act of dying. For the last few weeks his decline has been more marked and rapid, and was attended with much suffering; but in all of it he was not only sustained by the grace of God, so as to endure it without murmuring, but was enabled to rejoice in God his Saviour, with a full assurance of a blessed immortality beyond the grave.’

“The sketch of Dr. McFarland’s life here given, is of necessity very imperfect. Having known him for nearly fifty years, and an intimate friendship for about thirty, our feelings plead for a much fuller expression than the space suitable for it permits. The aged and good minister of Jesus Christ was no common man. He was a man of great worth, and has been so esteemed wherever known. His long life was not only without a stain, but was adorned with gifts and graces which mark it as one to be had in everlasting remembrance.

“In the councils of the Church it would not be easy to point out his superior. His eminent piety, the uncommon soundness of his judgment, his remarkable prudence, and conciliatory spirit—though none more inflexibly firm and true to principle—gave his opinions great weight from the Church Session up to the General Assembly. To this last judicatory he was more frequently sent than any other member of Lexington Presbytery; and in the Assembly of 1856, having been chosen as the Moderator, he presided over its deliberations with a dignity and skill not only satisfactory to all, but which excited general admiration.

Words to Live By:
Noting that Rev. McFarland was born in Ireland in 1788 and emigrated to the United States in 1793, his life at that point makes for an interesting comparison with that of the Rev. Alexander McLeod who was born in Ireland in 1774 and who emigrated here in the 1790s. McLeod being a bit older, remembered the bitter lessons of Irishmen being enslaved by the English, and so as a young pastor, spoke out against the enslavement of blacks. In contrast, McFarland, coming to this country as a child, may not have been raised with that historical awareness of his Irish heritage, and later taking up a pastorate in Virginia, he became a committed advocate of the Southern Confederate cause. We can only assume his views on slavery followed suit. Had he remained in the north, would he have had those same views? Perhaps, for  we readily admit that sin knows no geographical boundaries. Moreover, we know that even true Christians can be decidedly wrong about things, be they political, social, economic, or other. Most people, Christians included, tend to mirror the views of friends and close associates. The man or woman who can stand against the overwhelming sympathies of the crowd is a rare individual indeed. Don’t be so brazen as to think you can be that rare person, but do make every effort to be rooted and grounded in the Scriptures. With fear and trembling, make every effort to live out the Scriptures and to live above the prevailing winds of culture and the times, with your eyes fixed on Christ Jesus as Savior and Lord. May God grant you the mercy and strength to live out His will, regardless of what society may bring your way.

Image source: Portrait as found in The Presbyterian Magazine, 1856.

For Further Study:
Papers of Francis McFarland, 1815-1871, Archival Material – 2 reels : microfilm; 35mm.
Abstract: Collection contains 23 diaries and account books and 25 manuscripts, 1821-1864. With these are an analytical outline by W. Edwin Hemphill and two brief biographies of McFarland. The collection contains student writings; notebooks from lectures at Princeton Theological Seminary; diaries of missionary trips into “the pines” of Southeasern N.J. and the midwest, including contacts with the Cherokee Indians; attendance at General Assemblies; expense accounts; politics in Washington, D.C. (1832); Philadelphia; meteorological observations; his church and life in Augusta County, Va., the Civil War including the splitting of the Presbyterian Church, deaths of his sons, and religion in the Confederate camps.

The collection contains student writings; notebooks from lectures at Princeton Theological Seminary; diaries of missionary trips into “the pines” of Southeasern N.J. and the midwest, including contacts with the Cherokee Indians; attendance at General Assemblies; expense accounts; politics in Washington, D.C…