October 18: Our God Is Marching On.

Is God constrained? Will He yet again work in powerful ways? Are we expectantly watching and praying for Him to yet again walk among His people? In 1859, there were mighty acts of God observed and recorded world-wide, with great numbers brought to saving faith in Christ. Much of this occurred notably in the United States and throughout Great Britain. See for instance the sermons of D. Martyn Lloyd-Jones delivered on the centennial anniversary of the 1859 revival, here. And yet another account that I have just come across quite unexpectedly, in an address given by the Rev. Dr. William Childs Robinson. Dr. Robinson, or “Doctor Robbie” as he was affectionately known by his students, was professor at the Columbia Theological Seminary from 1926 until his death in 1982. This is an excerpt from his Centennial Address delivered before the Synod of Alabama (PCUS) in 1961, as reported on the pages of The Presbyterian Journal, vol. 20, no. 25 (18 October 1961), pages 5-6, 8, 18. 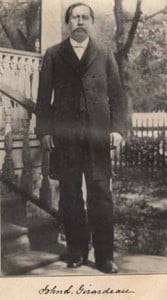 “Despite the fanfare and cavalcades for evangelism, this last year saw the lowest increase on professions of faith in five years, the greatest number of losses, and the lowest net gain. These shocking statistics ought to send us to our knees that we may know God’s way with His people today. Perhaps, there is a word for this year in the account of the revival God granted through John L. Girardeau’s ministry in the Anson St. Presbyterian Church of Charleston where nine-tenths of the 500 members were Negroes.

“The greatest event in his ministry was the revival in the later eighteen fifties. This began with a prayer meeting that constantly increased until the house was filled. Some of the officers of the Church wanted him to commence preaching services, but he steadily refused, waiting for the outpouring of the Spirit. His view was that the Father had given to Jesus, as King and Head of the Church, the gift of the Holy Spirit, and that Jesus in His sovereign administration of the affairs of His Church, bestowed Him upon whomsoever He pleased, and in whatever measure He pleased. Day after day, therefore, he kept his prayer addressed directly to the mediatorial throne for the Holy Spirit in mighty reviving power.

“One evening, while leading the people in prayer, he received a sensation as if a bolt of electricity had struck his head and diffused itself through his whole body. For a little while he stood speechless under the strange physical feeling, then he said: “The Holy Spirit has come; we will begin preaching tomorrow evening.” He closed the service with a hymn dismissing the congregation, and came down from the pulpit, but no one left the house. The whole congregation had quietly resumed its seat. Instantly he realized the situation. The Holy Spirit had not only come to him — He had also taken possession of the hearts of the people.

“Immediately he began exhorting them to accept the Gospel. They began to sob softly, like the falling of rain, then with deeper emotion to weep bitterly, or to rejoice loudly, according to their circumstances. It was midnight before he could dismiss his congregation. A noted evangelist from the North, who was present, said, between his sobs, to an officer of the Church: ‘I never saw it on this fashion.’ The meeting went on night and day for eight weeks. Large numbers of both black and white were converted and joined the various churches of the city. His own was wonderfully built up, not only in numbers, but also in an experience that remained in the Church. It is in such events that ‘Our God is marching on.’ “