This author and his wife had the experience of once seeking to begin a new congregation of the Presbyterian Church in America in a Midwestern city in the fall of 1980. Scheduled to meet on a certain Lord’s Day, two of the three families committed to starting the mission went on a vacation that weekend, leaving only one family to meet with my wife, daughter, and myself. The signs were not promising at all, believe me. We wondered whether we had made a mistake in leaving our established congregation in a nearby city. Yet today, that congregation is flourishing as a Presbyterian and Reformed congregation, despite that small beginning.

Ezra Hall Gillett [1823-1875], in chapter 2 of his History of the Presbyterian Church in the U.S.A., relates the story of the first Presbytery in the colonies. That beginning was equally small and not at all promising. Dr. Gillett states:

“The first Presbytery formed in this country, dates (on this day October 27) from 1705 or 1706. The loss of the first leaf of the records leaves the precise time uncertain. (This author has a copy of those minutes.) Our first view of it is obtained from the minutes of a meeting, called probably at Freehold, N.J., for the purpose of ordaining Mr. John Boyd.

“It consisted at this time of seven ministers, Francis Makemie, John Hampton, George Macnish, Samuel Davis, John Wilson, Jedediah Andrews, and Nathaniel Taylor. Some of these men had been for many years laboring in their respective fields.

“In 1684, Makemie was performing the duties of pastor of the church at Snow Hill, which he had assisted to organize. He had been ordained as Evangelist in 1681, and sent out by Laggan Presbytery, on the application of Colonel Stevens of Maryland, as a missionary to this country. For some time he labored in Barbados, and afterwards on reaching Maryland, notwithstanding all obstacles, his hearers and congregations multiplied. It became, consequently, his great anxiety to obtain more laborers, for the extensive and inviting field which was opened before him. With this great object in view, he . . . crossed the ocean and applied for aid to the Presbyterian Union of London. His application was not in vain.

“Makemie returned in the fall of 1705 with two ministerial brethren, his ‘associates’ John Hampton and George Macnish. Macnish commenced preaching at Monokin and Widomico; Hampton, who had applied with him to Somerset Court to be qualified, mean-while going north with Makemie to New York. Of the other members of the Presbytery, Samuel Davis was residing in Delaware as early as 1692. John Wilson, as early as 1702, preached in the court-house at New Castle. Jedediah Andrews was born in Massachusetts in 1674 and moved to Philadelphia after he graduated from Harvard. The prospect of his young congregation was far from promising. But it did increase.”

Words to Live By :
Perhaps some of our subscribers are in a local congregation—a people small and without promise to the eye—and in this so very similar to the beginnings of the Presbyterian Church in this land. Yet if the Spirit has called you to it, take heart, and continue on in the work. Be faithful to study the Word of God as summarized in the Westminster Standards, so that you will have a foundation in theology. And believe Acts 13:48c as you share the gospel to your friends and neighbors, that “as many as were ordained to eternal life believed.” God will bring spiritual fruit to your endeavors for Christ. 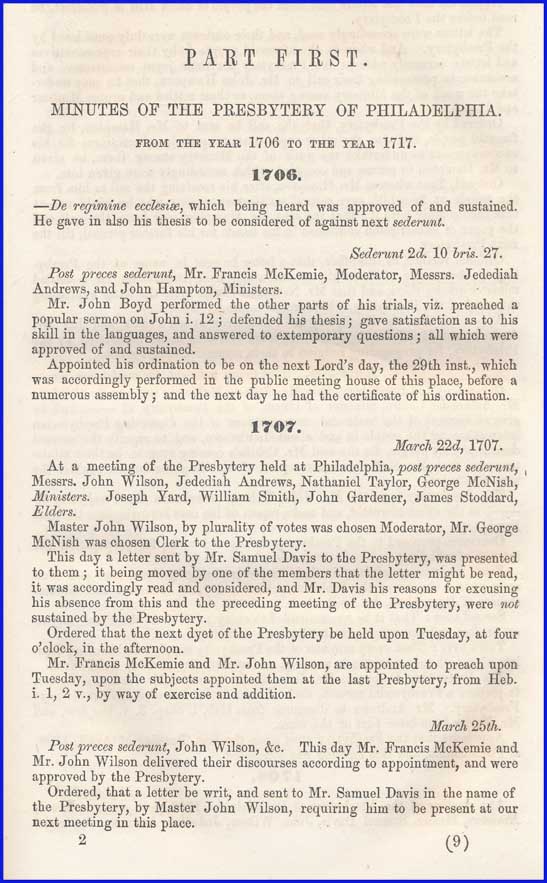