My friend Tom Martin, a Reformed Baptist brother in Christ, recently provided this very apt summary of the Reformation, which I would like to share as a preface to our post today:

“What history calls the Protestant Reformation began 499 years ago this week. The event most consider the opening round of the contest was the distribution of Martin Luther’s 95 Theses on the eve of All Saints’ Day, November 1, 1517, declaring his objections to the system of church absolution involving “indulgences.”This was a contest of thought and idea, although it threatened the very lives of those who disagreed with the conventional wisdom in the church. Because Luther’s interference with the sale of papal indulgences for sins seriously disrupted the commercial interests of the pope and the Roman church, the very lives and safety of Protestant reformers were in jeopardy.Five doctrines have been identified as being at the heart of this controversy, and they are usually referred to in their Latin form: “Sola fide! Sola gratia! Sola Christus! Sola Scriptura! and Soli Deo Gloria!”1) Sola fide is the truth that we are saved by our faith alone, no part of our salvation being due to our own good works. See, Romans 3:28 & 1:17.2) Sola gratia is the truth that all of our salvation is by grace alone, totally apart from any merit in us. See, Ephesians 2:8,93) Sola Christus teaches that anything apart from Christ – masses, crucifixes, relics of the saints, indulgences, fasts or feasts – which the church can offer add no merit in our cause. See, I Peter 1:18,194) Sola Scriptura separates all human traditions and practices from our one and only absolutely reliable authority for Christian faith and life–the Bible. See, Galatians 1:8,9; II Timothy 3:14-175) Soli Deo Gloria means that all that we do should be only for the glory of God. See, Romans 11:36.”

[unsolicited advertisement: Tom is planning to lead a Reformation Tour March 22 to April 5, 2017, to England and Scotland. If interested in details of the trip, including cost and itinerary, please email him.]

What better reason for remembering this day. No, not Halloween. Rather, October 31st, and specifically October 31, 1517, as it marks the date of the beginning of the Protestant Reformation.  On this date, an obscure Augustinian monk by the name of Martin Luther nailed ninety-five theses to the church door in Wittenburg, because that was the usual custom of advertisement for the people’s attention.  It was in effect a public bulletin board. Luther nailed the document up at noon sharp because that was the time of the most frequent feasts.  Professors, students, and the common people would be coming from all four corners to the church on “All Saints Day,” for that was a time when it was filled up with relics for transfers of credit or “merit” under the Roman Catholic system. 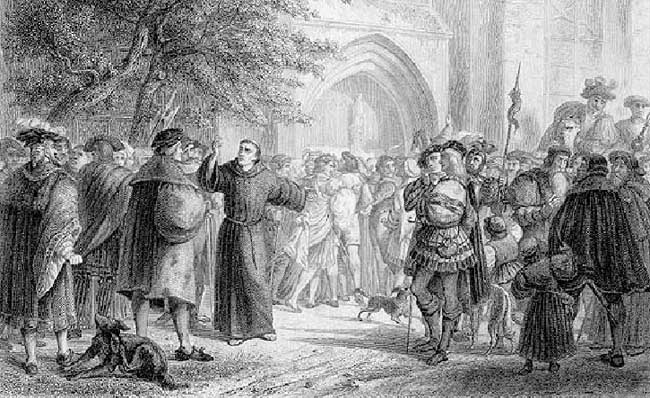 A lot of Protestants, when hearing of this incident of the nailing of ninety-five theses, think that they were ringing endorsements of Protestant theology. In reality, they were more Roman Catholic than Protestant. There is no protest against the Pope and the Roman Catholic church, or any of her doctrines, not even against indulgences. These theses were silent about justification by faith alone. They were primarily opposed to the abuse of indulgences.

But while the form is Romish, the spirit and aim is Protestant. They represent a state of transition between twilight and daylight. We must read between the lines, as the leaders of the Roman Catholic church did in the sixteenth century. As they did, they saw a logical drift which sought to undermine the whole fabric of Romanism.

Luther hoped that there would be a scholarly debate of the abuse of indulgences. But no one came to debate him. Instead, with the recent invention of the printing press, the copies of the ninety-five theses were sent all over the empire. The pope had a copy within two weeks. The common people read them and rejoiced over them. Luther was the talk of Germany. His ninety-five theses had gone viral! There was a trumpet call being sounded for what later on became the Protestant Reformation.

Words to live by: In 2017—now mere months away—we will celebrate the five-hundredeth anniversary of the Protestant Reformation. Will there be a revival of its themes in your church and more important, in your heart—those magnificent, God-honoring themes of Scripture alone, Christ alone, Grace Alone, Faith Alone, and Only to the Glory of God?  That sums up what Luther, and Calvin, and Knox thundered to the masses and the visible church. Reflect on the story of Martin Luther and the Protestant Reformation, for all it has meant, in your heart, home, and church.