October 7: Here We Stand, On the Word of God.

“The grass withereth, the flower fadeth; but the word of our God shall stand forever.”—Isaiah 40:8.

The following brief editorial served as an introduction to the first issue of THE PRESBYTERIAN GUARDIAN, a periodical which began on October 7, 1935 and ran up until its merger with THE PRESBYTERIAN JOURNAL in October of 1979. So much of Dr. Machen’s writing remains prescient and timely even for our day and age. Not much in the world has changed over the last eighty-one years. Humanity is still born in sin and still desperately needs a Savior. And the Word of God has not changed either. It remains the very Word of God, infallible and inerrant, our only rule of faith and life. 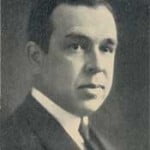 The Changing Scene and the Unchanging Word
by the Rev. J. Gresham Machen
The Presbyterian Guardian, Vol. 1, No. 1 (7 October 1935)

We certainly have before us today a changing scene, and very ominous are the figures that stalk across it. Twenty years after a war which was supposed to have been fought to make the world safe for democracy. Russia stands under the most soul-killing despotism, perhaps, that the world has ever seen; and despots rule also in Italy and in Germany. One of these despots, after the approved tradition of despotic rulers, is now engaged in plunging the world, so far as his actions can accomplish it, into another world war.

In our own country, a man has to be blind indeed not to see that the same forces are mightily at work. Religious liberty has not yet been destroyed among us, as in Mexico; religious edifices and schools have not yet all been taken over by government. But when teachers even in private schools and Church schools and other institutions of learning are, as in New York and elsewhere, required to take an oath of office, as though they were state officials, we have in principle the totalitarian state; and liberty, just at the most important point, I in principle being destroyed. Everywhere we find centralization of power under an arbitrary bureaucracy; the area of liberty is slowly but very surely being reduced. Solemn contracts public and private are being treated as scraps of paper; the solid foundations of liberty and honesty are crumbling beneath our feet.

Yes, it is certainly true that we have before us today a changing scene.

Certainly we cannot trust the Church. The same destructive forces that are at work in the State are also at work in the Church. It seems almost unbelievable, but still it is a fact that at this present moment, in the largest of the Presbyterian bodies in this country, the Presbyterian Church in the U.S.A., a secret trial is actually being held in the city of Philadelphia. Two members of The Independent Board for Presbyterian Foreign Missions, against their earnest protest, are being deprived of that right to an open hearing which is accorded even to the most degraded criminal under our civil laws. The Church, bearing the sacred name of Christ, is standing on a lower ethical plane than that which prevails in the world outside—than that which prevails among people who make no profession of religion at all.

Unfortunately, the tendency manifested in this secret trial is not isolated in the Presbyterian Church in the U.S.A. Everywhere open discussion is discouraged. If anything is wrong, we are told, we should present the matter to committees of the General Assembly; but the pulpit and the press should not be used to present it to the rank and file.

The truth is that the bureaucracy in the Church has not a bit more regard for the Constitution of the Church, than the bureaucracy in the State has for the Constitution of the State in so many countries of the world. We are today in the midst of a time when the landmarks are being destroyed. Solemn constitutional guarantees of liberty are treated as though they meant nothing; and when people make solemn subscription to a system of doctrine that solemn pledge is treated as though it were a mere empty form of words.

No, we cannot find a haven of refuge from the confusion in the world by any mere appeal to the Church. In many places the visible Church has been swept away into the full current of the world’s madness.

Well, then, if we cannot appeal to the Church, is there anything to which we can appeal? Is there anything that is constant amid the shifting scene? The answer to that question is given by the text that stands at the top of this page, the text that gives us the program for all the corresponding pages in future issues of THE PRESBYTERIAN GUARDIAN.

Where shall we today find the Word of God?