November 3: The Search for a 19th-Century Organ

The Koehnken Organ at Covenant Seminary
by the late Robert I. Thomas 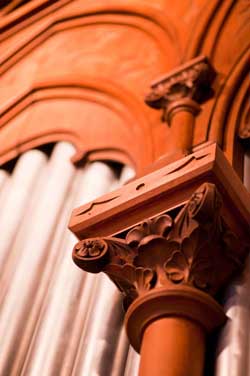 At the request of Dr. Robert G. Rayburn, then president of Covenant Theological Seminary, a search was launched for a good, used, tracker action pipe organ of suitable size to be located in the chapel which was about to begin construction. Leads were checked out; a two-manual (keyboard) organ at St. Henry’s Roman Catholic Church in Cincinnati, Ohio became the best prospect. The church’s congregation had dwindled, the organ had stood mute for years, and the Gothic building was slated for demolition. Negotiations for its purchase were quickly completed and generous members of the seminary board gave funds for its purchase, moving and rebuilding.

Dismantling was arduous and sometimes dangerous and the marathon of trips up and down the winding stairway of the high balcony to carry thousands of parts for packing was exhausting. The Johann H. Koehnken organ at CTS is believed to be the oldest two-manual organ in the state of Missouri. Restoration and building of 19th-century pipe organs requires special skills, dedication and sympathy for this style of instrument, qualities not shared by all organ builders. Louis IX Associates of St. Louis was selected by the Seminary to complete the job of moving the organ and commencing the first stages of restoration. The organ arrived in St. Louis in two large trucks on November 3, 1976, to be stored until the chapel was ready.

This organ contains about 4,500 moving parts, each of which was cleaned, repaired or replicated with a replacement part when necessary in a time-consuming but careful manner. Most of the parts are beautifully handmade of wood, and will last for centuries if properly maintained, though this type of organ requires a minimum of attention except at 50- to 75-year intervals. This organ, over 100 years old, is so constructed that it is able to peal forth the praises of God for hundreds of years more. 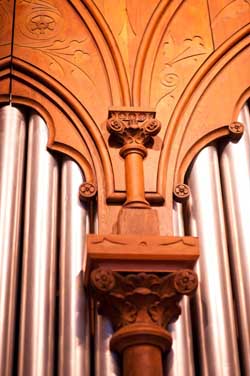 The original builder of the organ, Johann H. Koehnken [1819-1901] emigrated from his native Saxony, where he had trained as a cabinetmaker and worked as one for two years, to continue his trade in Wheeling, West Virginia,, for another two years before arriving in Cincinnati in 1839. There he was taught organ building by his employer and fellow German Mathias Schwab, who had come to the United States in 1831. Schwab was the West’s first major organ builder, and he supplied finely wrought instruments over a wide area, including Detroit, Baltimore and St. Louis. Of the hundreds of organs built by Schwab, only two are know to exist in original condition and both are in Kentucky.

When Schwab retired in 1860, he left the firm in the hands of Koehnken, and the business became Koehnken & Company. Schwab had hired Gallus Grimm, a German cabinetmaker with four years of organ building experience, in 1853, which led to a life-long partnership which was reflected in the firm’s name after 1875, when it became known as Koehnken & Grimm. After Koehnken’s death, the first was styled Grimm & Son.

The organ at Covenant Seminary is not the first by Koehnken to be in St. Louis. Research located an account of the instance when Koehnken loaded four organs on a flatboat, brought them to St. Louis, and spent seven months here installing them. The firm’s organs were well known throughout the Ohio Valley and in other parts of the Midwest. Tragically, not many of them remain, with most having been needlessly destroyed or discarded as “old.” Those extant are now recognized for their grand sound.

The Search for the Organ’s History.
The organ was built in 1869, four years after Mathias Schwab’s death, for the Mound Street Temple of the K. K. Benai Israel Congregation in Cincinnati, at a cost of $4,900—the price of a fine organ indeed in that era!

When the organ was removed from St. Henry’s Roman Catholic Church in Cincinnati in the Fall of 1967, no one knew the organ’s history. But organ historians could take one look at the instrument and tell that it was of a style that predated St. Henry’s, which was built in the 1890’s. The obvious clues to the organ’s earlier date include the large amounts of wood ornamentation above the display pipes, the square stop shanks, and the hitch-down Swell pedal. Furthermore, dates written inside the case went as far back as September, 1872, nearly a year before St. Henry’s previous building was begun, and wherein the ceiling height would not have accommodated the organ.

The large, six-pointed star in the center pinnacle of the case was a clue that indicated the organ may have been built for a Hebrew temple. But such stars are sometimes used in Christian settings as double symbols of the Trinity. At any rate, the old Isaac Wise Temple, a few blocks from St. Henry’s Church in Cincinnati, still had its much large 1866 Koehnken organ, and this was the only organ it had ever had. So the CTS organ could not have come from there.

The confusion began to clear when it was learned that the K. K. Benai Israel Congregation (now spelled “Bene”) in Cincinnati had had, in its Mount Street Temple built in 1869, a Koehnken organ of two manuals and thirty stops, which is the very same as the CTS organ. Accounts of the Temple’s 1869 dedication state that the organ case had features of heavily carved black walnut, with the carving gilded and with the display pipes stenciled in bright colors. The CTS organ had these features, though the colorful stenciling had been obscured by several coats of gold paint. The Mound Street Temple was said to have an architectural blend of Gothic and Arabic styles, and this same blending can be readily seen in the CTS organ case, with its pointed and rounded arches.

The names Harris and Johnson are chalked inside the case with the dates 1872 and 1878. Membership rolls from the Temple, as researched by Mr. Willard Kahn of that congregation, include both names in that general era, and a David Israel Johnson helped found this “first Hebrew congregation of the West” in 1819. Through the courtesy of the Archives of the Archdiocese of Cincinnati, it was learned that St. Henry’s Church acquired the organ as a gift from their men’s club in 1907, which facts fit beautifully with the Hebrew congregation’s move to a new Rockdale Temple in 1906 or 1907 and their abandonment of the Mound Street Temple and its organ. Edward Grimm, son of Gallus Grimm of Koehnken & Grimm, is likely to have effected the move to St. Henry’s in 1907, for some of his business cards were used for bushing beneath the toe boards on the wind chests.

There can be no doubt that this is the organ which was purchased by the K. K. Benai Israel Congregation in 1869, making it one of the fairly early organs in a Hebrew temple in America, the earliest having been built in 1841 by Henry Erben of New York for Kahal Kadosh Beth Elohim (Holy Congregation House of God) in Charleston, South Carolina. Inside the organ, pencilled on a wind trunk, are the initials “M.S.,” which at first led historians to think that the organ might have had some parts built by Mathias Schwab, who died in 1864. But after the link with the K. K. Benai Congregation was made, the initials confirmed it : the builders very likely had written “M.S.” on the wind trunk for the Mound Street organ to distinguish it from other, similar windiness, under construction at the same time for other organs.

Although a few other organs are known to exist in Missouri, they are all small and with but one manual (keyboard). The 1869 Koehnken organ at Covenant Seminary is believed to be the oldest two-manual organ in the state!

Upon completion of construction and the installation of this magnificent organ, the dedication of the Robert G. Rayburn Chapel took place on May 18, 1979. A litany especially composed by Dr. Rayburn was used in the dedication service. 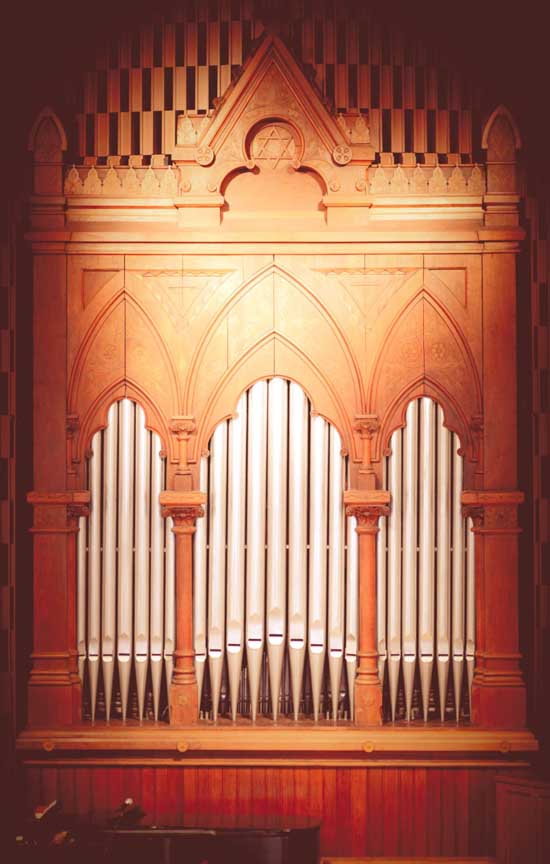