A Presbyterian in Name Only
by Rev. David T. Myers 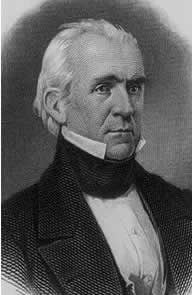 [Alfred Nevin, in his Presbyterian Encyclopedia(1884, p. 624), notes that “President Polk was a warm friend of the Presbyterian Church, of which his now aged and venerable widow long has been and still is an exemplary and useful member.”]