In the Cause of Christ, There Can Be No Compromise 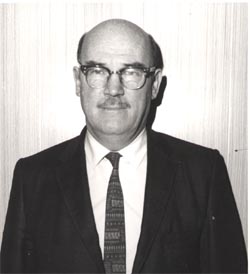 John Mair Lisgar Young was born on November 7, 1912 in Hamheung, Korea to parents Luther L. and Catherine F. (Mair) Young, Canadian Presbyterian missionaries. John began his education there in Korea and later moved to Kobe, Japan, where he graduated from the Canadian Academy. He received the degrees of B.A. (1934) and M.A. (1935 from Acadia University in Wolfville, Nova Scotia, doing thesis work in the field of the German Reformation. He then attended Westminster Theological Seminary in Philadelphia from 1935 to 1937, before transferring to Faith Theological Seminary, where he graduated in 1938. He was both licensed and ordained to the ministry later that same year.

On May 28, 1938 he married Jean Elder in Toronto, Ontario, and together they served as missionaries in Harbin, Manchuria from 1938 to 1941. From 1942 to 1948 he served as the organizing pastor of the Bible Presbyterian church in Wilkes-Barre, PA. The Youngs next moved to Nanking, China to continue their missions work, but were forced to leave China when the communists took over in 1949. A subsequent move to Japan initiated one of his most important periods of ministry. There he served from 1949 until 1966. During this time he helped to plant three churches and was cofounder of the Japan Christian Theological Seminary. At that institution he taught systematic theology and also served as the president of the school from its founding in 1954 until 1966. In that year his wife died of cancer and he returned to the United States with his seven children, arriving to settle in Grand Rapids, MI and work on the Th.M. degree at Calvin Seminary, with thesis work focusing on the topic of Christology. Upon completion of that work, he moved in 1967 to Lookout Mountain, TN to take a position at Covenant College as Missions professor.On February 8, 1968 he married Jane Brooks, a faculty member in the English department. They remained at Covenant until his retirement in 1981, at which time they returned with their daughter to Japan. Work there continued under the auspices of World Presbyterian Missions, the foreign missions arm of the Reformed Presbyterian Church, Evangelical Synod. Dr. Young served as president of WPM for three years. Two of his sons currently serve as foreign missionaries in Japan.

During his time in Japan, Dr. Young served for fourteen years as the editior of The Bible Times. His first book, The Two Empires in Japan, was first published in 1958. Subsequent editions were brought out in 1959, 1961 and 1987, and the work has been described as “a valuable contribution to an understanding of the situation with which the Japanese Church is confronted today.” As a record of church-state conflict, it remains a very pertinent work today. In 1961 he was awarded the Doctor of Divinity degree by Covenant College and Seminary, St. Louis, MO. Other publications authored by Dr. Young include a series of ten booklets on The Motive and Aim of Missions and a booklet on Karl Barth’s Doctrine of the Trinity, along with numerous articles on missions and covenant theology as the theological basis of missions. Research for his last work, By Foot to China, was begun during the time of his studies in Christology in 1966-1967 as he focused on the history and theology of the Nestorians. [click here to read Paul W. Taylor’s review of By Foot to China.]

Words to Live By:
Matt Filbert, Director of Missions for the RPCNA, in his review of The Two Empires in Japan, wrote:—

“To what lengths are God’s people and His churches prepared to go in order to preserve themselves, avoid persecution, or pursue growth? John M.L. Young understood the dangers of compromise especially when churches would compromise the truth and authority of the Word of God. Mr. Young writes, ‘History has indeed shown that in the time of persecution the church that tries to save its life by compromise with pagan demands will lose its life, while the church that is willing to lose its life in martyrdom, if necessary, will find its life preserved by a host of new believers.’ ”

Only be strong and very courageous, being careful to do according to all the Law that Moses my servant commanded you. Do not turn from it to the right hand or to the left, that you may have good success wherever you go. (Joshua 1:7, ESV)