November 8: A Father’s Advice To His Son

On this day in 1877, Archibald A. Hodge began his duties as a professor of theology at the Princeton Theological Seminary. 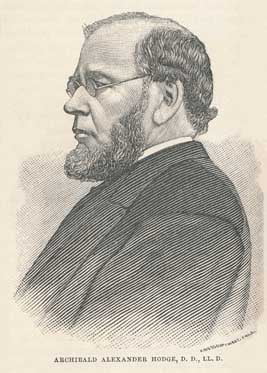 In 1873 the directors had proposed that Archibald Alexander Hodge, professor of systematic theology at Western Theological Seminary, be appointed assistant to his father at Princeton. Charles Hodge thought the move unnecessary and no further steps were taken until 1877, when Dr. Hodge notified the directors that it was time for him to give up, or at least reduce, his teaching. Again the name of A.A. Hodge was put forward. Charles Hodge wrote to his son:

My dear Alexander:
You say I told you to go to Allegheny [Western Seminary]; you memory may be better than mine, but I have no recollection of having been so unwise. At any rate, in the event of your being called to Princeton, I shall not assume the responsibility of deciding whether you ought to come…
The view I take of the matter is simply this:
1. Our Board is bound to take that course which it thinks will best promote the interests of this Seminary and the general interests of this Church.
2. If our Directors think there is any other man available, as well qualified to fill the position as you, they ought to leave you where you are.
3. But if they are satisfied that you are the best man to keep up the character of this Institution for fidelity to our doctrinal standards, I, if a Director, although your Father, would vote for your election.
4. I would do this, because I think that this Seminary, not because of any superiority of its faculty, but simply because of providential circumstances, is at present, at least, of special importance. It, therefore, should be specially considered.
5. All such considerations, as delicacy, your personal wishes, cheapness of living here or there, are not of any serious weight.
6. The question whether you are the best available man to fill the place here, is for our Directors to decide. Their decision, however, is subject to a veto from your “inner consciousness,” if your conscience constrains you to exercise it. “Commit your way unto the Lord, and He will direct your steps.”

The directors elected A.A. Hodge associate professor of didactic theology, and he accepted and was inaugurated on November 8, 1877, in the First Presbyterian Church in Princeton. William M. Paxton, pastor of the First Presbyterian Church of New York City, spoke for the board of directors. Princeton, he said, is a “school of learning” and a “cradle of piety.” “It is a place where educated young men are imbued with the doctrine of the Cross, and with this truth as a burning power in their hearts, they go out into the world to kindle and fire the hearts of others.” Your work is not done, Paxton reminded Hodge, “when you have demonstrated a truth or deposited an intellectual dogma in the memory of a student.” “No, no,” he added, “your responsibility continues until you have sent that truth as a lighted torch into his soul to kindle there its light and to warm his whole being as with fire.” “Give them Theology, give them orthodoxy, give them exposition, proof, demonstration, give them learning,” Paxton told the new professor, “but give it to them warm.“

Words to live by: It’s not easy to be so objective with our own children as Dr. Hodge appears to have been with his, but his counsel to “Commit your way unto the Lord, and He will direct your steps” (Ps. 37:5) certainly remains good and true counsel. But realize this, that “committing our way to the Lord” isn’t something we do on the spur of a difficult decision. Committing our way means living according to God’s declared will, day by day. We may and will fail from time to time, but by God’s grace we persist in seeking His will as the operative force in our lives. Is it your heart’s desire to live a life that pleases your heavenly Father? Are you actively turning away from sin where you see it, and quickly confessing sin when you transgress? As you look over your life, can you say that you are dying more and more to sin, and living more and more unto righteousness? Then rest assured, the Lord is directing your steps!