A Long Ministry to the Glory of God, and Now a Centenarian!
by TE Bob Woodson and Wayne Sparkman 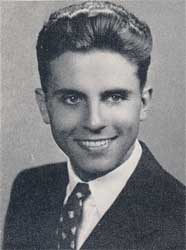 Harry G. Marshall is 100 years old today! He was born in Ilion, New York on January 11, 1918 to parents Floyd and Ruth (Goodale) Marshall. In 1937, at the age of 19, Harry first met Florence Weir when he began attending Columbia Bible College. Before Harry could finish his studies, the US Army drafted him in March, 1941.

Perhaps facing what might be ahead of him in war-time, Harry decided he could stand “the single estate” no longer, called Florence on the phone, asked the appropriate questions and got the desired “I do.” They were married April 26, 1942 just prior to Harry’s service as an assistant to a Division chaplain with the Fourth Infantry. That Division landed in France on D-Day, and saw some 20,000 casualties in almost continuous fighting up until V-E Day.

As an assistant to the Division Chaplain, he had numerous opportunities to witness for Christ. In later years, Harry liked to kid Florence during mission meetings. He would relate how the young and pretty French women welcomed him and all the G.I.s in the liberation of Paris, France, with kisses and bear-hugs. Florence would respond, “You never tire of telling that story, do you?,” and all their co-workers would laugh.

At war’s end, Harry returned to school at Columbia Bible College, graduating there with the B.A. degree in 1947 and the M.A. degree in 1948. He next prepared for the ministry at Faith Theological Seminary, earning the M.Div. degree in 1951.

He was ordained on May 25, 1952 and immediately entered the foreign mission field, working in Peru, initially under the auspices of the Independent Board for Presbyterian Foreign Missions. Later the Marshalls served with World Presbyterian Missions and finally with the PCA’s Mission to the World.

Harry and Florence served in Peru from 1953 to 1988. They had five children: Ruth, Lois, Colin, Verne and Nathan. Ruth later married Gerardo Gutierrez and they served under MTW in Chile and other areas of Latin America. Ruth passed away early in 2012. The Marshall’s son Verne is also serving with MTW, in Chile, and one of his daughters is also on the mission field in Latin America.

Harry was famous as a traveling evangelist in the mountains of Huanta and the jungle along the Apurimac River.

He was best known as an itinerant evangelist, often walking miles and miles and hours and hours to isolated villages. Yet he did much more than to share the Good News. He taught the believers to grow and helped them to organize into small groups which later became churches. He also taught in the summer camps and month-long Bible Institutes. He had the knack of keeping his teaching clear, direct, and true to the Scriptures, not weighed down with fancy terms and strange-sounding language.

During the meetings that they held, Florence played the pump organ and also taught the ladies and children how to sing the Quechua hymns and Spanish choruses. In addition, she used flannel graph materials to maintain the interest of her pupils and to drive home the lessons. Ladies were always welcomed to her home and she gave good answers to their many questions about life’s problems. She combined her many literacy lessons with how to cook simple and inexpensive meals.

In the years of their ministry in Peru, Harry led many to Christ and built them up in the faith. He was famous too for his jokes and taught as much at meal times as in formal teaching from the pulpit. In the courses offered at the Bible Institute, he taught sessions of one weekend, or one week or even as long as four weeks. He was beloved by the brethren. His co-worker, Bob Woodson says that he looked up to him for guidance and travelled some with him. Harry learned quite a bit of Quechua, but could not preach in it. He had a bookstore in his house to sell Bibles, hymnbooks, etc. and always sold some during his many trips.

Harry was honorably retired in 1985, and in the years after returning to the States, he served for a time as stated supply for the Manor Reformed Presbyterian Church, New Castle, Delaware. In 2012, Harry suffered not only the death of his daughter Ruth, in February, but Florence also passed away, in September of that year. He now resides in Wilmington, Delaware.

We praise God for those many years of ministry, and we thank the Lord for the blessing of this long life.