When God’s Children Come to See Me 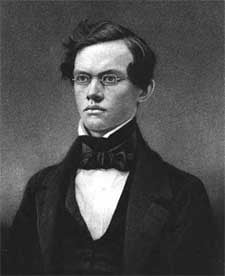 Walter Macon Lowrie was born on February 18, 1819, and came to saving faith in Christ while in college, in 1834. Like Lyman Atwater of yesterday’s post, Walter soon determined to enter the ministry. He attended Princeton Seminary in preparation, and during those years resolved to become a missionary. The continent of Africa was particularly upon his heart, but following his ordination, the Board of Foreign Missions determined the need was greatest in China. Lowrie set sail in January of 1842.  By August of 1847, he was dead, murdered by pirates.

God is sovereign, and even when death seems senseless. it is only because we lack the Lord’s wisdom and knowledge. Especially in such cases is it wrong to try to attach a reason; we can only trust in God’s goodness.

A few years after Walter died, his father assembled his son’s letters and writings and published a Memoir. Reading some of that Memoir in preparation for this post, the following letter gave a good insight into the character of Walter’s Christian faith. Note too how the Lord used a godly woman, insignificant in the eyes of the world, in confirming and resolving Lowrie’s interest in missions :

Letters While At College

Yesterday was our communion here; and though it was so near to the end of the session, that we could not have much time for preparation, and no fast day was appointed, yet it was about as profitable a day as I ever spent. True, at the table, and whilst partaking of the elements, I was not happy; nay, before I rose from the table, I was almost as miserable as I ever was. Yet it was profitable. A temptation came across my mind to this effect: “I am not now enjoying communion with Jesus Christ; and therefore I am not a Christian. I may as well now give up all pretensions to religion, and quit acting the hypocrite any longer.” And although not willingly, I felt as if I ought to do so; but the thought rushed into my mind, “If I am so miserable under the hidings of God’s face only, how shall I bear His eternal wrath?” It was the first time I had ever been influenced more by fear than by other motives. I was miserable, however. But see the goodness of God and of Jesus Christ. After church, I was thinking of my conduct during the session, and meditating on the two verses, “Seek ye first the kingdom of God;” and all my anxious cares vanished. I had been impressed deeply with a sense of my sinfulness, and was wishing to make some resolutions; hereafter to live more to the glory of God, but felt almost afraid to do it. I knew I should fall away; and I felt that it would but aggravate my guilt, were I to sin against such renewed obligation. But the sentence, “Sufficient unto the day is the evil thereof,” calmed my heart. I felt that it was my duty to follow present duty, and leave the future to God, without any anxious cares; and I was enabled to do so, and roll all my cares upon the Lord. Oh, the peace I at that moment possessed! I could scarce refrain from laughing, I was so joyful.

I determined then to live every day as if it were to be the last I should have to live, and to do my duty accordingly;—in reality, “to live by the day.” At secret prayer I was more full of God’s presence, and comprehended more of that view of Christ’s character, which is so great, grand, and incomprehensible, that I could scarcely proceed for joy, and from my own experience during the day, I could tell something of the difference between God’s presence and his absence. Today, I cannot say I feel, or have felt, as I could wish—not so much life and animation; but I have been enabled to mourn for it. During the sermon (Mark xvi. 15), I was enabled to see more of the greatness of the Christian religion than I ever did before, and to feel, too, that man could not be the author of such grand ideas as I saw there held out.

This evening I was walking out into the country for exercise and on my return I passed the cottage of a negro woman, commonly called “Old Katy.” She was out in the road, when I passed her. I shook hands with her, and spoke a few words to her. Before we had spoken three sentences, she was was talking about religion. She is a most eminent Christian, and we stood about ten or fifteen minutes there talking. She soon got to speaking about the missionary cause. Her heart was in the matter, and she said, “I am very poor, but as long as I live I will be something to it. I have often given a little to it, and I never laid out any money better. I could not do it. I never lost a cent by it.”

I wish I could give you some idea of the emphasis she used, but pen and ink cannot express her manner and the feeling she manifested. She very cordially asked me to call in and see her; “for it is food to me when any of God’s children come to see me; it is food.” She went on thus for some time, talking about various matters, but all of them religious. Oh! how little I felt when I heard her talk thus, and compared my attainments in the Christian course with hers.

Words to Live By:
Give yourselves wholly to the Lord, in all you say and do. See the Lord as your only gain in this life. See Him as your All in all. You will not regret it. You will not suffer true loss, but will only gain true eternal riches.

For Further Study:
Memoirs of the Rev. Walter M. Lowrie, Missionary to China.