June 6: Ten Reasons for Being a Presbyterian

As we enter the season of General Assemblies and Synods—June being the month when most of the American Presbyterian denominations convene in their national meetings—this seemed a good time to look over a little tract from the late 1840’s titled “Ten Reasons for Being a Presbyterian. We ran this text some years ago over a series of ten days, but will this time give only the summary statements for each of the ten points offered by our anonymous author. An original copy of the tract is preserved at the PCA Historical Center, and its front cover is pictured below on the left.

Additionally, on the cover of the tract is this quote from the great Swiss historian, J.H. Merle d’Aubigne, captured here as an excellent summary statement:— 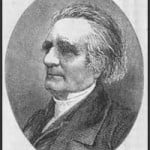 1. I AM A PRESBYTERIAN—because I know of no Church that in Doctrine, in Discipline, in Government and Worship rests so entirely on the Word of God.

2. I AM A PRESBYTERIAN—because I know of no Church that maintains more firmly, and sets forth more faithfully the leading doctrines of the Word of God. The unity of the Godhead, and the trinity of Persons therein—the utter depravity and helplessness of mankind in consequence of the fall—the recovery and salvation of the Church by the Redeemer—the Incarnation of the Son of God, His Atonement, and all His mediatorial work and offices—the work of the Holy Spirit in the Conversion and Sanctification of the sinner—the sinner’s interest in the finished work of Christ, and his Justification by Grace through Faith alone—the Second Advent of Christ to Judgment—the Resurrection of the dead and the eternal separation of the righteous and the wicked—these are among the truths embodied in the Confession and Catechisms of our Church, taught in her schools, and preached from her pulpits. And our Church has specially been privileged to maintain the truths relating to the deep things of God;—the covenant of redemption entered into by Jehovah, Father, Son, and Holy Ghost, before the foundation of the world; the salvation blessings secured in Christ as covenant head and surety, and flowing down to the Church through Him; the communication of these covenant-blessings by the Holy Spirit, together with the whole doctrines of free grace,—the sovereign, distinguishing, free grace of God.—(Eph. i. 3, 4, 5; 2 Tim. i. 9; 1 Cor. iii. 11; Eph. ii. 8.)

3. I AM A PRESBYTERIAN—because the form of Church Government, which we call Presbytery, is founded on the Word of God. The office-bearers in our Church are Scriptural in their offices and authority. In each of our congregations there is a Minister, whose special office it is to preach the Word and dispense the Sacraments. There is no difference of rank among these Ministers or Presbyters. All are equal as brethren, having one Master and King, even the Lord Jesus.—(Matt. xxiii. 8, 9, 10.) This is what we mean by Presbyterian parity. All our ministers are alike bishops or overseers, not of other ministers but of their own flocks; not prelates but pastors, as in apostolical times.

4. I AM A PRESBYTERIAN—because there is no form of Church Government that so combines the two great principles, Order and Liberty—the Order of Government and the Liberty of the People.

5. I AM A PRESBYTERIAN—because I know of no Church that so secures the rights and privileges of the Christian people. The people, that is, the members of the Church, choose their pastor, their elders, and deacons. Those only can be chosen and called to the pastoral charge of our congregations who have been educated under the superintendence of some Presbytery, and been admitted, after examination and trials, as probationers of the Church; all means being used to provide a well qualified and suitable ministry for the supply of our Church.

6. I AM A PRESBYTERIAN—because I know of no Church whose form of worship is so simple and so scriptural. Not any other book but God’s book is made to claim the attention of the people. Every Sabbath-day the Word of God is read, expounded, and applied. In the devotional services, those who cannot worship the Father in spirit, will find no substitute of form and ceremony to delude them.

7. I AM A PRESBYTERIAN—because the Sacraments are in our Church administered agreeably to the Word of God. We baptize adults on profession of their faith in Christ, and we baptize the infants of such as are members of the visible Church.—(Acts xvi. 33; Gen. xvii. 7, with Colossians ii. 11, 12; 1 Cor. vii. 14.) 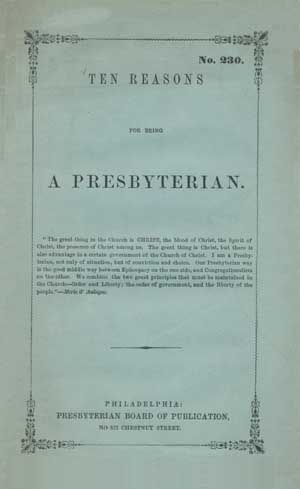 8. I AM A PRESBYTERIAN—because I love and pray for unity; not uniformity at the expense of truth, but unity based on truth and charity. Our Presbyterian Church has its congregations knit together in mutual dependence and sympathy, as one body in the unity of the Spirit, having one Lord and Head, one faith, one baptism, one God and Father of all. And all are united under one superintendence and government, holding the same standards, and maintaining the same principles, the strong helping and bearing the burden of the weak, the whole body fitly joined together and compacted by that which every joint supplieth, with one mind striving together for the faith of the Gospel. We thus enjoy a visible, as well as a spiritual unity, according to the scriptural idea of the Church, the body of Christ.—(Ephesians iv. 8–16.)

10. I AM A PRESBYTERIAN—because I know of no Church that has been so valiant for the truth, or that has been honoured to do and suffer so much for the cause of Christ on earth. None can show a more goodly company of confessors, a more noble army of martyrs, than the Presbyterian Church. Let history testify this, from the earliest times, through the dark ages of Popery, down even to our own day, when the Free Church of Scotland, in her noble stand for truth, and in the sacrifices made by her ministers and people for Christ’s sake, has displayed a spirit worthy of olden times, and shown that living faith and high principle are yet to be found on the earth. While maintaining in common with other Protestants the truths relating to the Prophetical and Priestly offices of the Redeemer, the Presbyterian Church has especially been called on to testify and to suffer in defense of the Kingly office of Christ; that He is the only Head of the Church, visible and invisible, (Colossians i. 16, 17, 18,) that Christ alone is king in Zion—(Psalm ii. 6.)