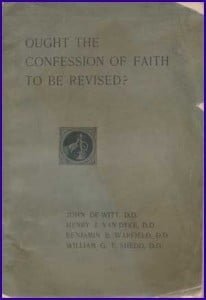 It is easy enough to criticise the language of the Westminster Divines ; but it is not so easy to write formulas on the same subjects, which will command as general an assent throughout the Church.

For some time I’ve known of a little volume titled OUGHT THE CONFESSION OF FAITH TO BE REVISED?, a slim paperback acquired a few years ago by the PCA Historical Center. [Click on the embedded link to view a digital edition of this work.] The historical context for this book is the effort led by Henry J. Van Dyke and Charles A. Briggs to bring about a revision of the Westminster Standards as adopted by the Presbyterian Church in the U.S.A., while men like Benjamin B. Warfield and W.G.T. Shedd, along with Rev. John DeWitt, opposed the campaign to revise the Westminster Standards.  Their denomination had officially adopted the Standards in 1789, albeit with some changes to suit the American political situation. The matter was debated openly in the Presbyterian newspapers of that day, and the campaign begun by Van Dyke and Briggs eventually won acceptance by a sufficient number of Presbyteries, with the PCUSA General Assembly later voting to adopt a number of changes to the Westminster Standards in the early years of the 20th century, changes that arguably furthered denominational decline.

But looking back to when the matter was being debated, this little book of papers begins with a powerful opening argument presented by the Rev. John DeWitt and dated on this day, June 7th, in 1889: 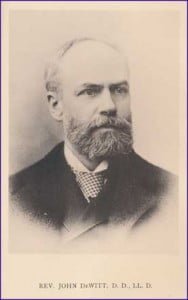 The subject of the Revision of the Confession will now come before the Presbyteries in a form which will enable our ministers seriously to consider it. One does not need to express the hope that they will bring to its study an adequate appreciation of the importance of rightly answering the Assembly’s questions, or of the magnitude of the task they will impose on the Church if they shall decide in favor of Revision. This may safely be taken for granted.

There is, however, a suggestion which any minister may properly take on himself to make at the outset. This is, that if a Presbytery shall express a desire that the statements of the Confession on a particular subject be amended, this desire should be given not only a general and negative form, but a positive and constructive form also. Let us know exactly the words which a Presbytery may wish to substitute for the present words of the Confession.

It is easy enough to criticise the language of the Westminster Divines ; but it is not so easy to write formulas on the same subjects, which will command as general an assent throughout the Church. This is a fair suggestion. I do not know whether a committee was appointed by the General Assembly lately in session, to receive the Presbyterial replies ; but it is clear to me that such a committee might quite properly eliminate as valueless, and leave unreported, any reply which does not give a confessional or symbolical form to a Presbytery’s proposed amendment. Let us have samples of the new or revised statements. If any one wants revision on any subject, let him try his hand at a formula correlated to the formulas which he does not want revised. Why not? If the present confessional declarations are made to stand up for critical inspection in the fierce light of the open day, why should the proposed future confessional declarations be suffered to half conceal themselves in a sort of dim moonshine ? It is possible that some of our ministers have, or suppose they have, formulas in their heads better than those in the Confession. Let us see the formulas. Let them be subjected to the criticism that can be offered only after they shall have been printed. Let no one be permitted to suppose that he is doing anything for Revision by simply saying, “The sections on Predestination should be amended,” but compel him to write out a section which he is prepared to defend as better.

Words to Live By:
Our Confession of Faith does itself clearly imply that it is capable of revision:

But as Rev. DeWitt has said above, such work is quite difficult and those who would propose such changes should, to use the vernacular, “put up or shut up.”

The table of contents for the above volume are as follows: