July 16: The Ideal of the True Deacon

“. . . We must rid ourselves of the notion that the Deacon is somewhat of a secular personage in the Church, preferably an able man of affairs, not sufficiently spiritual to be an Elder, and yet too useful not to be used in some lower and unspiritual service. A modern Gibeonite to hew wood and draw water! Our Presbyterian Nethinim, neither priest nor Levite, far from the ministry, and not quite an Elder!” 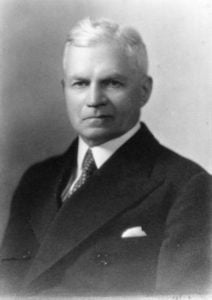 Today’s post comes from the pen of the Rev. Dr. Edward Mack [1868-1951]. He was educated at Davidson College (BA; MA; LLD), the University of Cincinnati (Ph.D.), and Princeton Theological Seminary. Dr. Mack served churches in St. Louis, MO; Norfolk, VA; and Shreveport, LA before serving as professor of Old Testament languages at Lane Theological Seminary, 1904-1915, and then in a similar post at Union Theological Seminary, Richmond, VA, 1915-1939. It was during those latter years at Union Seminary that he wrote his booklet on the office of the deacon, a small work which was well received and which went through six editions.

The Presbyterian Church in America based its Book of Church Order on that of the denomination they left. They saw no need to draft an entirely new Book when the principles embedded in the old Book had served the Church well for nearly one hundred years. So it is not surprising that many of the paragraphs in the PCA’s Book echo those of the PCUS Book, even to this day and despite all the many changes enacted since 1973. This is the case with our Chapter 9 on the Office of the Deacon, which almost word for word remains the same as that of the 1922 PCUS revision of their chapter on the deacon. With that background, let’s turn to chapter 5 of Dr. Mack’s booklet:—

The Deacon Himself
“To the office of Deacon, which is spiritual in nature, should be chosen men of spiritual character, honest repute, exemplary lives, brotherly spirit, warm sympathies, and sound judgment.” — PCUS Form of Government, Chap. IV, Section IV, Paragraph 48.

[And for comparison, here is the PCA’s paragraph:

“To the office of deacon, which is spiritual in nature, shall be chosen men of spiritual character, honest repute, exemplary lives, brotherly spirit, warm sympathies, and sound judgment.” —PCA Form of Government, Chapter 9, paragraph 3.]

Having considered the importance and duties of this office, finding that in its enlarged field it is now a renewed, but not a new, office in the Church; that it has been lifted from disparagement and partial disuse into special honor and large opportunity; that while many churches hitherto have magnified the office, henceforth all are to magnify it, and use it to attain glorious ends, this paragraph brings us to the heart of the discussion. The key to the situation is the man himself. The assurance of the success of the office is the peculiar fitness of the man for his high office. That fitness, in general, is the quality which fits all officers in the Church for their several offices, and every individual member to serve Christ in his part and place. That fundamental characteristic is spirituality; men of the Spirit for an office which takes the temporal and external service of the Church, and translates it to spiritual service.

. . . We must rid ourselves of the notion that the Deacon is somewhat of a secular personage in the Church, preferably an able man of affairs, not sufficiently spiritual to be an Elder, and yet too useful not to be used in some lower and unspiritual service. A modern Gibeonite to hew wood and draw water! Our Presbyterian Nethinim, neither priest nor Levite, far from the ministry, and not quite an Elder!

The well-chosen words of this paragraph [in our Book of Church Order] and Paul’s description of the true Deacon in his letter to Timothy dispel such an unworthy view. The Deacon should be consecrated to his Lord for his special service; he must live the life of prayer, even as must the Minister and the Elder. The difference in offices is not difference in presence and power of the Spirit, but in differing gifts for different services, all of which are spiritual and holy. “We who are many are one body in Christ, and severally members one of another, and having gifts differing according to the grace given unto us, whether deaconing, let us give ourselves to our deaconing, or he that ruleth, with diligence.” Of all offices, it is the one most necessarily to be committed to spirit-filled men, for the very reason that it has to do with material things and duties, which must be transformed into means of spiritual service.

To this other qualifications are added, emphasizing uprightness, enthusiasm for the Gospel, and the warmth of a true Christian sympathy. Such qualities are the same in essence as those required in the words of institution in Acts vi : “men of good report, full of the Spirit, and of wisdom.” The Deacon’s life and character are a large part of the fulfillment of his office. A pure life, a great faith, a liberal heart, a flaming zeal are the qualities which rise to the ideal of the True Deacon. [emphasis added]

Words to Live By:
Let me take this opportunity to encourage you to regularly prayer for the deacons in your church. You may not have thought to do something like that, but the deacons have a big job to do in the church, and when they are properly about their work, what they bring to the church will enrich everyone in the congregation [no pun intended].