The high court of the Presbyterian Church, U.S.A. was on a roll. Any and all teaching elders, including some laypeople, who had been involved in the Independent Board for Presbyterian Foreign Missions were being disciplined by the respective courts of the church. Presbyteries had convicted the men of refusing to obey the Mandate of 1934, which ordered them to cease and desist from any connection with this upstart mission board. Appeals had been made and denied from presbyteries, synods, and general assembly. Now sentences of deposition from the ministry had gone out to men like J. Gresham Machen, Charles Woodbridge, Ed Rian, Paul Woolley, H. McAllister Griffiths, Merrill McPherson, Carl McIntire, and David K Myers, suspending them from their ordinations.

One of the few supporters of the Independent Board, and one who had been on the board of the mission board himself, was the Rev. Dr. Roy Talmadge Brumbaugh, pastor of the Tacoma, Washington Presbyterian Church U.S.A.   He saw what was coming, especially when the Presbytery of Olympia began to demand that all Session and Congregational records of the church be given to them.  The liberals had begun to investigate the church.  Dr. Brumbaugh met unofficially with his session of elders and deacons.  After much discussion, the hearts and minds of the officers was to leave the denomination.  On that following Sunday,  Dr. Brumbaugh led his church and most of the  five hundred members in it, directly across the alley into a large Scottish Rite Cathedral available to them to worship on August 20, 1935. 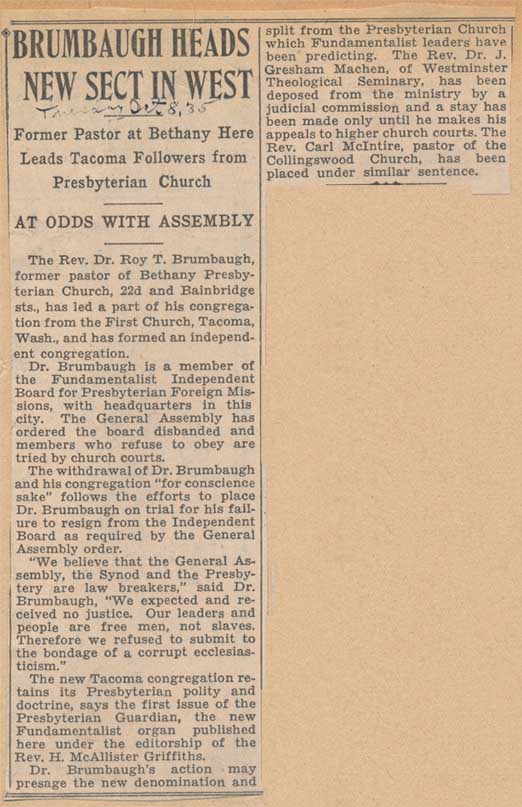 One of the people commented that “it wasn’t a church split.  It was an exodus.”  Fourteen of twenty-four ruling elders left the USA church.  Forty-nine of fifty-six deacons walked out.  Twenty-three of twenty-five women society leaders left.  Eleven of thirteen Sunday School superintendents joined the new church.  Every Systematic Bible Study teachers, except one, walked across the alley to the new “church” building.  Almost all of the youth, along with the Young People’s leader put their hand to the spiritual plow.  In fact, nine young people who had committed their lives to Christ’s service joined the exodus.  Oh, and most of the choir left, and five of the seven branch Sunday School missions withdrew.  It was such a division that the remnant in the Presbyterian U.S.A. church appealed to other Presbyterian local churches to send them members so that they would have a church service the following Sunday.  The church would initially be called the First Independent Church of Tacoma, Washington.  Who was this man who led them out of apostasy?

Roy Brumbaugh was born April 15, 1890 in Pipersville, Pennsylvania.   Trained at Princeton Seminary from 1916 – 1919, he had studied under the feet of men like Benjamin Breckinridge Warfield, John Davis, William Benton Green, Geerhardus Vos, Robert Dick Wilson, Caspar Wistar Hodge, Oswald  Allis, and John Gresham Machen.  Ordained by the Philadelphia Presbytery in 1919, Brumbaugh was the pastor of three Presbyterian churches until he went to the First Presbyterian Church of Tacoma, Washington in 193

Words to live by: Unusual times call for unusual means.  While we may look back and question his independent status at that time, we can well understand the hesitancy to join immediately a new denomination.  And yet others of sound faith and judgment were not hesitant, believing that one of the glories of the Presbyterian church is its connectionalism.  He was certainly used of God’s Spirit in winning countless servicemen to the gospel, and sending many on their way into gospel ministry itself.