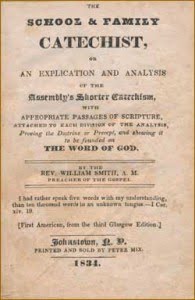 Q. 47. What is forbidden in the first commandment?

A. The first commandment forbiddeth the denying or not worshipping and glorifying the true God as God, and our God ; and the giving of that worship and glory to any other which is due to him alone.

Denying God. –Doubting if there be, and desiring that there were no God ; neglecting to improve our minds by obtaining a proper knowledge of the character and perfections of God, as made known in his word ; and committing sin as if there were no God to see and punish us for it.

Not worshipping and glorifying the true God as God and our God. –This means both a total neglect of prayer to God, and also the pretending to honor and serve him with our lips in public, while our hearts are far away from him.

Due to him alone. –Which ought to be paid to God, and to none else.

From this answer, we learn that the sins forbidden in the first commandment, are of four sorts :

2. The not worshipping and glorifying of him “as God.” –Rom. i. 20, 21. So that they are without excuse, because that, when they knew God, they glorified him not as God.

3. Neglecting to honor him as “our God.” –Psalm lxxxi. 11. But my people would not hearken unto my voice, Israel would none of me.

4. The giving of that worship and glory to any other, which is due to him alone. –Rom. i. 25. Who changed the truth of God into a lie, and worshipped and served the creature more than the Creator, who is blessed for ever.

Q. 48. What are we especially taught by these words “before me,” in the first commandment?

A. These words, “before me,” in the first commandment, teach us, that God, who seeth all things, taketh notice of, and is much displeased with, the sin of having any other God.

In this answer we are informed of three things :