Let This Be Our Reminder to Pray for the Church in China!

On the Spirituality of the Church—A Real-Life Example. 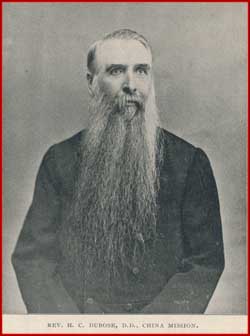 Among the sons of Columbia sent out by the Southern Presbyterian Church, perhaps none has a deeper hold on the affectionate memory of the church than Hampden C. DuBose—the biographer of Dr. J. L. Wilson. Dr. DuBose was a South Carolinian, a Confederate Soldier—and for almost fifty years a soldier of the Cross, claiming for his King the city of Soochow, China (1872-1910). He preached indefatigably in the market and the street. He used his pen in translating and in writing a religious literature for the Chinese. Among these works he translated a book by his old Seminary professor, Dr. Wm. S. Plumer The Rock of Our Salvation. He was made President of the Chinese Anti-Opium League, and wrought so effectively in that endeavor that the movement to suppress the opium traffic became “the strongest movement in China.” Rev. DuBose died on September 30, 1910.

The Minutes of the China Mission of the Presbyterian Church, U.S. (aka, Southern), provide many interesting insights into that work and time. We find one particularly noteworthy feature in their Minutes for 1899, when a stand was taken by the Mission in regard to the Mission’s relationship with the Chinese government. This would just prior to the time of the Boxer Rebellion, perhaps even only in the months prior.

The paper adopted by the PCUS China Mission, while a response to the pending crisis that faced them, also provides a good insight in the practical outworking of the doctrine of the spirituality of the Church, at least as held by Southern Presbyterians:

But, next to the division of the Mission, perhaps the most important action taken by the Mission was that defining the political status of missionaries. This paper is as follows:

“With regard to the political status of missionaries in China, and the regulations which should control their intercourse with Chinese officials,

Resolved, That the members of the Southern Presbyterian Mission ask nothing more than the rights of private citizens of the United States.
“This resolution is based upon the following considerations:

“1. That functions of a missionary are spiritual. His great work is to care for souls. To assume political power in reality, or even in appearance, is inconsistent with the nature of his office.

“2. Right relations between church and State forbid missionaries to claim ‘equal rank with viceroys and governors,’ ‘demand interviews,’ with them, and with them ‘negotiate and conclude affairs.’ The missionary is not an officer of the State. The United States’ Minister and the Consuls are in China to protect, and do protect, all their fellow-citizens, and the missionary must not usurp or disregard their authority. For a missionary to interfere int he government of China is wrong in principle and pernicious in practice.

“3. Whatever rights of appeal to local officials, or to officers of high rank, may be secured for all citizens of the United Stats, may, with propriety, be used by missionaries, who should, in exercising their rights, be on an equality with other private citizens, and in no way claim to be officers of the United States, or to be equal in rank with any Chinese officials.