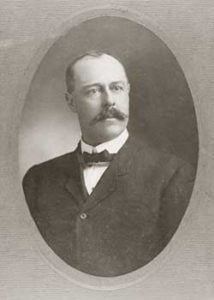 George Andrew Blackburn, D.D., was born in Greene County, Tennessee, on this day, October 16th, in 1861. He was the son of John Melson* Blackburn, a Presbyterian minister, who held a number of pastorates in the State of Alabama. George received his preparatory school education at his home, his collegiate course at the Southwestern Presbyterian University and he prepared for the ministry at Columbia Theological Seminary [this was while it was still located in South Carolina], graduating from Columbia with the class of 1886. He was soon afterward installed as pastor of the Presbyterian church in McConnellsville, SC, a post which he held for fifteen months, resigning there to accept the call of the Arsenal Hill Church, of Columbia, SC. In this pulpit, he was the successor of the late Dr. John L. Girardeau, the organizing pastor of this church. Rev. Blackburn labored here in this church until called to his reward, on May 25, 1918, having served the Arsenal Hill church as pastor for over thirty-one years. It was during this time that he received the degree of Doctor of Divinity from the Presbyterian College of South Carolina.

[*Note: There is some confusion as to George’s father’s middle name. Some sources have “Nelson” while others provide “Watson” as his middle name. But we take our source, the memorial for Rev. Blackburn found printed in the Minutes of the Synod of South Carolina, as closest to the source and thus authoritative.]

On April 7, 1886, he was married to Annie Williams Girardeau, daughter of John L. Girardeau, D.D., and this union was blessed with four children, all of whom survived him. They were Mrs. Johnson Hutchinson, of Auburn, AL, Misses Chauncey and Laura Blackburn, of Columbia, and Rev. John C. Blackburn, pastor of the Darien and St. Mary’s group of churches.

The work of Dr. Blackburn centered largely around the building up of the Arsenal Hill church, but he was also very active in all of the work of the Southern Presbyterian Church, in whose courts he was regarded as an able advocate, a wise, conservative and safe counselor.

He was a charter member of the Congaree Presbytery, faithful in attendance upon its sessions when able. His knowledge of Presbyterian law and practice was given considerable weight in the decisions of his Presbytery. As a member of the Presbytery’s Committee on Theology, he usually conducted the examinations of candidates for the ministry, because of his comprehensive grasp of the whole Calvinistic system. As Chairman of the Committee on the Sabbath, his reports were always full of appeal for a proper and Scriptural observance of the Christian Sabbath. His rigid Scriptural stand on the sanctity of the Sabbath was well known. Simplicity of worship, which was rigorously advocated and maintained by Dr. Girardeau, was made a permanent feature of the ministry of Dr. Blackburn.

As a man, he was genia and pleasant; as a friend, he was loyal, sympathetic and helpful to those who came to him for counsel. A man of firm convictions and courage, he was unwilling to compromise where it mean yielding of principle.

He was especially a friend of the poor, the needy and the outcast, among whom he did a great work; greater than most were aware of, since he never paraded his good deeds.

Among his greatest works to the Church at large may be mentioned The Life Work of John L. Girardeau, D.D., which was completed and published a short time before his death. In his failing health, his desire and prayer was that he might live long enough to finish this book, which prayer God graciously answered.

During his last illness, he said to some friends who visited him: “I only know I am on the earth and not in heaven when my friends visit me. I am holding sweet communion with my Lord every moment.”

So, through days of anxious watching and waiting, he finally received the call of God and entered peacefully into his rest and reward May 25, 1918, and his body was laid to rest in Elmwood Cemetery, attended by a host of sorrowing relatives, friends and church members.

“Servant of God, well done!
Rest from thy loved employ;
The battle fought, the victory won,
Enter thy Master’s joy.

“Soldier of Christ, well done!
Praise be thy new employ;
And while eternal ages run,
Rest in thy Saviour’s joy.”