The following plaintive appeared on the pages of a Presbyterian newspaper in October of 1879, exhorting both pastors and parents to pay better attention to the spiritual nurture of the children of the Church. The account is interesting in itself, but also for the vignette provided on the ministry of Rev. Daniel Baker, so noted for his children’s sermons.

Presbyterianism is a family religion. Every baptized child is a member of the Church. The children are the lambs of the flock. They must be fed, but they cannot receive and digest the food suitable for veterans in the faith.

Surely they should not be left at home in idleness and spiritual starvation, while the parents are receiving the bread of life; yet, does it benefit the poor little lambs to be thrust into starchy clothes and imprisoned “bolt upright,” in an uncomfortable pew for an hour and a half, staring in idiotic vacancy at the preacher, who utters not a word within the ken of childhood? Nay! many a disappointed little heart is carried home, having been denied, from sheer oversight, a single crumb from the Master’s table. Some faithful parents still marshal their children to church? But what do they go for? Are not the majority of shepherds forgetting to feed the lambs; forgetting that these little boys are the future elders and deacons, nay, the future ministers in the Church of Christ?

Not a quarter of a century ago the “family pew” was an institution. The usual Sabbath morning scene was that of whole families going together to Church. The father and mother each leading a toddling little one; and respectfully walking behind the fresh, clean boys and girls, some half dozen or more, even those old enough for beaux and sweethearts, deeming it out of the question to be absent from the family pew Sunday mornings.

Every little fellow had his “Sunday clothes,” instead of his “evening dress,” and the Sabbath was to him the white day of the seven, when “brand new,” he turned over a clean leaf in life, and started over again. The mother then knew that her boy was not on the church steps in doubtful company, or one of the disorderly occupants of the back pew. Parents ruled their households then; now the children have the supremacy. They go to church or not, as they like, and sit where they please when they go.. Sabbath evening drills in the Shorter Catechism are old-fashioned; memorizing the Psalms and hymns, a fogy notion, and the main idea is to make the Sabbath a pleasant day. When the minister calls, the children go tumbling out of the back door as if some frightful apparition had made its appearance. 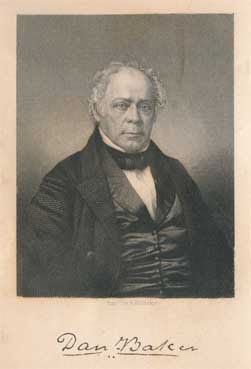 How many of the readers of the OBSERVER remember Rev. Daniel Baker, that blessed old patriarch, embalmed in the memory of every one who, as a child, heard his children’s sermons–literally the milk for babes. How often have many of us sat in a crowded house of children, and heard him talk right to our hearts about “coals of fire;” and the songs he would sing, in the midst of his sermons, to bring into wakeful surprise some nodding head or drooping pair of eyes; such as “Let dogs delight to bark and bite;” and the swearing word he gave the boys, “Pot hooks and hangers!” as a cure for swearing.

The children must be looked after. The world is carrying on its interests, and so is the Evil One, upon the very wings of lightning. The boys can hardly wait to get into their “teens,” or to show a shady upper lip before they are hurried into the battle of life.

An immense energy must, on the other hand, be thrown into the religion of the present day, and children must be enlisted before the world has filled up their hearts, as it will, and that right early.

Words to Live By:
When children are baptized in a Presbyterian church, the pastor typically asks the congregation if they will covenant to pray for that child. Sad to say, but most of us probably thereafter forget to ever again pray for that child. Brothers and sisters! Take this occasion to stop and pray for the children in your church, that the Lord would be at work in their hearts, leading them to saving faith in Christ Jesus as their Savior, drawing them near to a lifetime of discipleship, striving to walk closely with Him.