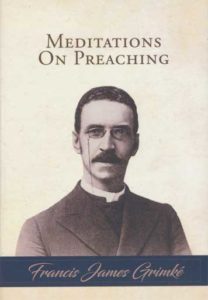 Abolitionists Angelina and Sarah Grimké, Francis’ white half-sisters helped to secure Francis’ freedom and they gave the necessary funds for Francis to attend Lincoln University in Pennsylvania. Later, feeling drawn to the ministry, he entered Princeton Theological Seminary from which he graduated in 1878.

On July 7, 1878, Francis was ordained as a Presbyterian minister. He would spend over 50 years in the pulpit, most of it at Washington’s 15th Street Presbyterian Church. He was noted as one of the most articulate opponents of racism: “Race prejudice can’t be talked down, it must be lived down.” He was a participant in the March 5, 1897 meeting to celebrate the memory of Frederick Douglass which founded the American Negro Academy led by Alexander Crummell.

Here, from volume 3 of his Works, in the section, “Stray Thoughts and Meditations, Grimké looks back over his ordination to the ministry and subsequent years:

July 7, 1918.
“Just forty years ago today I was ordained and installed pastor of the Fifteenth Street Presbyterian Church. I can hardly realize that four decades have passed since my connection officially with the work here began. It is only as I look in the glass at my changed appearance, at the frost upon my head—as I look around for scores of familiar faces that I used to see, but see no more, and at the children that I baptized in infancy, now grown to manhood and womanhood, some with children of their own, that I am made sensible that some years have elapsed since the beginning of my
ministry here.”

“As I look back over these forty years I have many things to be thankful for. God has been more than good to me, in giving me for thirty-five of those years a most helpful and delightful companionship of one of the best of women : in giving me many dear friends; and since the death of my wife, especially, the great help which my brother and niece have been to me within the home. I don’t know what I should have done without them and also during the whole of those forty years, the unspeakable privilege of preaching the gospel of the grace of God in Christ Jesus to a perishing world. As I look back I can truthfully say, Goodness and mercy have followed me during all those years. I have been blessed with a reasonable amount of health, and have had a very, very pleasant pastorate. While I am deeply conscious that I have not done as well as I might have done; that my ministry is far. far from being all that it might have been. I trust, however, that it has resulted in some good, that some have been helped by my ministrations to a truer, nobler conception of life; that some have been led by me to a saving knowledge of the Lord Jesus Christ and to an earnest, faithful consecration of themselves to him. There is no greater joy that can come to any one, than to know that he has led some one else to find the Pearl of greatest price.”

“And now as I look forward from this point, my earnest prayer is, that the few years that may be before me, may be the most fruitful years of my life; that, more than ever, I may be thoroughly consecrated to the work of bringing others into the kingdom of the Lord Jesus Christ. Whether my days be few or many. I want them all consecrated to the service of the Lord. Like the apostle Paul, may it be Christ for me to live; and then when death comes, I know it will be gain for me to die. Again my heart goes out in deepest gratitude to God for these forty years in the Christian ministry,—forty years of privilege, and of opportunity to work in his vineyard.”

Image source: The above image comes from the cover of a work, Meditations on Preaching, by Rev. Francis Grimké, available from Log College Press in their store. Other works by Rev. Grimké can be viewed here: https://www.logcollegepress.com/authors-g#/francis-james-grimke/