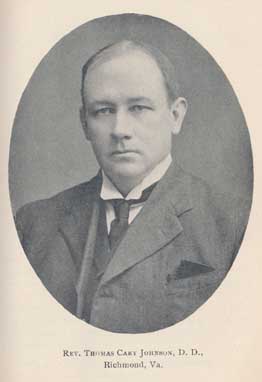 JOHNSON, Thomas Cary, educator, was born at Fishbok Hill, Monroe county, Va., July 19, 1859; son of Thomas and Alinerva. (Hinchman) Johnson; grandson of Barnabas and Sarah (Thomas) Johnson and of William and Mary (Simms) Hinchman, and a descendant of Scotch, Irish, Huguenot, Dutch and English ancestors. He was graduated from Hampden-Sidney college, Va., in 1881, took diplomas in Latin, Greek and mathematics at the University of Virginia, 1883-84, graduated from Union Theological seminary, Va., in 1887, and was a special student at the Yale Divinity school, 1887-88. He was licensed by the presbytery of Greenbrier, W. Va., in May, 1887; was professor of Greek and Hebrew exegesis at Austin Theological school, Texas, 1888-90, and was also assistant professor of mental and moral philosophy at the University of Texas during those years. He was ordained by the presbytery of Central Texas in August, 1890, and was a stated supply and pastor-elect of the 3d Presbyterian church at Louisville, Ky., 1890-91. He was professor of English Bible and pastoral theology at Union Theological seminary, Virginia, 1891-92, and became professor of ecclesiastical history and polity there in 1892. He was elected a member of the American Historical association. He received from Hampden-Sidney college the degree of D.D. in 1891, and that of LL.D. in 1899. He is the author of:

The Mode of Baptism in the Apostolic Age (1899);
John Calvin and the Genevan Reformation: A Sketch (1899).
He also edited the collected writings of the Rev. Dr. Thomas E. Peck, and contributed numerous articles to periodicals and newspapers.

Thomas Cary Johnson, D.D. LL.D. is one of the best known scholars, theologians and educators in the South. His career has for thirty eight years been closely associated with the Union Theological Seminary at Richmond, where he has held various chairs in the faculty of instruction and has been the man chiefly instrumental in building up the splendid library of that institution.

Doctor Johnson was born at Fishbok Hill, Monroe Co. Va., July 19, 1859, son of Thomas and Minerva (Hinchman) Johnson. His father was a Confederate soldier and after the war lived on a farm in Monroe Co. until his death in Dec. 1894. He was a director of his community bank. Dr. Johnson’s mother died in Feb. 1890. Doctor Johnson was educated in local schools and in Hampden-Sidney College where he graduated with the A.B. degree in 1882. Subsequently Hampden-Sidney bestowed upon him the Dr. of divinity degree in 1891 and the Doctor of Laws degree in 1899. He received diplomas in the schools of Latin, Greek and Mathematics at the University of Virginia, where he was a graduate student in 1883-1884. In 1887 he graduated from the Union Theological Seminary of Virginia and spent the following year as a special student in Yale University.

During 1888-90 Dr. Johnson was a professor of Old and New Testament exegesis in the Theological School at Austin Texas. In 1890 he was ordained in the Presbyterian ministry and for one year was pastor of the third church at Louisville.

Dr Johnson began his long and notable service with the Union Theological Seminary in 1891, first as professor of English Bible and pastoral theology. He was professor of ecclesiastical history and polity from 1892 to 1913 and since August 20, 1913 has held the chair of systematic theology. He became librarian of the seminary in 1907.

He married December 26, 1894, Miss Ella Faulkner Bocock, of Appomattox, Virginia, the third daughter of Thomas S. Bocock, one of Virginia’s able lawyers and for a number of years a member of Congress from the state until the outbreak of the Civil War and during the war he served in the State Senate. Mrs. Johnson, who died in April 1928 was a member of the Daughters of the American Revolution, the Society of Colonial Dames and the united Daughters of the Confederacy. Dr. Johnson has three children: Thomas Cary Jr. now an associate professor at the University of Virginia; Eleanor Holmes, an instructor in Queen’s College at Charlotte, N.C. and Miss Ann Faulkner, at home.

Abstract: Correspondence; journals; sermons; lecture notes and lectures on theology, missions, history of doctrine, church history, biblical studies, and Christian ethics; articles opposing union of northern and southern Presbyterian churches; essays on Christianity and evolution; pamphlets; biographical notes on Robert Lewis Dabney (1820-1898), Benjamin M. Palmer (1781-1847), and James Latimer (1845-1892); report (1912) on Romanism, by Johnson and others to General Assembly of Presbyterian Church in the U.S.; scrapbooks; prayers; photos; and other papers, relating to Johnson’s activities as minister, author, and professor of the Bible, ecclesiastical history, and systematic theology at Union Theological Seminary in Virginia.