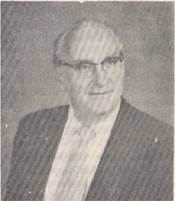 He was educated at Johns Hopkins University, New York University and at the National Bible Institute (1947), and upon graduation at NBI, he married Ruth Helen Buswell, of New York City, on June 20, 1947. He then began his preparation for the ministry by enrolling at Faith Theological Seminary, graduating there in 1950.

Rev. Noé was next pastor of the Bible Presbyterian church of Cono Center, in Walker, Iowa, 1969-1979 and concurrently principal of the Cono Christian School, 1969-1979. Both of those institutions were started by the Rev. Max Belz.

Leaving that post, he served as pastor of the Reformed Presbyterian church of West Chester, PA, 1979-1988 and was on the church relations staff for Covenant College, 1988 until his death. He was honorably retired in 1989 and died on July 31, 1991 while a member of the PCA’s Tennessee Valley Presbytery.

Words to Live By:
Rev. Noé was not well known outside his immediate church circles, yet he was a faithful servant of the Lord and was a great influence in the lives of those under his years of ministry. He is yet another example of how the Lord calls each of us to persevere in our life’s calling, whatever that may be, to seek to honor and glorify His name in all we do, endeavoring to do His will, as revealed in His Word, and to be faithful in keeping covenant with our God, in loving our spouse and our children, in serving our church and in loving our neighbors as ourselves.