A Potential Schism Halted by a Compromise

Initially there was no real problem with the written standards for the Presbyterian Church in America. Ministerial students were simply tested for their learning and soundness in the faith. But a controversy in the mother country soon changed this.  So the question arose, should teaching and ruling elders be required to subscribe to the subordinate standards of the Westminster Assembly in their entirety, or just for their essential truths? The fact that so many officers were still in the process of emigrating to the colonies made this a relevant question for the infant church to resolve. 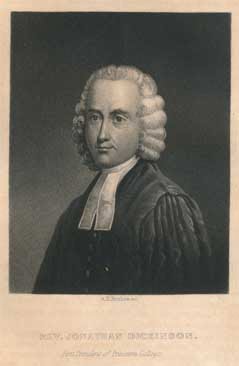 Conscious of the potential for schism, on September 17, 1729, Jonathan Dickinson became the main proponent against the total subscriptionist party in the church. His argument was simple. He believed the Bible was the sufficient rule for faith and life.  Subscription must be adhered to it and to it alone, not to some man-made summary of it, as good as it might be.

The total subscriptionist side also believed the Bible was all-sufficient for doctrine and life, but were equally convinced that the Westminster standards of confession and catechisms offer an adequate summary of the Old and New Testaments. To receive it and adopt it in its entirely would stop any heresies which may invade the church from either within or without the church.

At the synod in 1729, Dickinson and his followers won the day with what has become known at the Adopting Act of 1729. [Link fixed, 9/17/15 @ 10:23 a.m.] The document stated that on the one hand, there was a clear requirement to receive and adopt the Westminster Standards.  However, if an elder, whether teaching or ruling elder, had an exception to those standards, he was to make known to the church or presbytery his exception. The latter body would then judge whether the exception dealt with essential and necessary articles of doctrine, worship, or government. If it did not, then he could be ordained without official censure or social ostracism.

The entire body of elders gathered at the Philadelphia Synod gave thanks to God in solemn praise and prayer that the resolution of this potential schism had been averted and unity was maintained in the infant Presbyterian church.

Words to live by:  It is always good that disunity should be avoided and unity be maintained. But at what cost, is the question? The compromise here looked good on the surface. But presbyteries and synods and assemblies are made up of fallible men who can, sadly, declare that the basic truths of the Christian religion are not necessary to be held, as is the case now with several liberal Presbyterian bodies.  Obviously, much prayer must be made for those who instruct and rule over us, that God’s Spirit will keep the visible church pure in both faith and life. The true key to doctrinal unity springs from a daily awareness of our own sinfulness, from hearts broken before the Lord in godly humility, Seeking the forgiveness found in Jesus Christ alone.