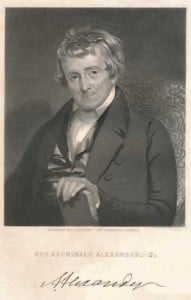 Dr. Archibald Alexander was, in addition to his service as the first professor at Princeton Seminary, quite dedicated in the work of writing evangelistic tracts, many of which were later gathered and published in the volume, Practical Truths. The following short quote is taken from one such tract:

Oh, precious gospel! Will any merciless hand endeavor to tear away from our hearts this best, this last, and sweetest consolation? Would you darken the only avenue through which one ray of hope can enter? Would you tear from the aged and infirm poor, the only prop on which their souls can repose in peace? Would you deprive the dying of their only source of consolation? Would you rob the world of its richest treasure? Would you let loose the flood-gates of every vice, and bring back upon the earth the horrors of superstition or the atrocities of atheism? Then endeavor to subvert the gospel; throw around you the fire-brands of infidelity; laugh at religion; and make a mock of futurity; but be assured, that for all these things God will bring you into judgment. I will persuade myself that a regard for the welfare of their country, if no higher motive, will induce men to respect the Christian religion. And every pious heart will say, rather let the light of the sun be extinguished than the precious light of the gospel.—[Dr. Archibald Alexander.