The Apostle of Presbyterianism to Western Pennsylvania

You cannot miss the connection. William Tennent sets up the Log College in New Jersey to train ministers for the infant Presbyterian Church in the colonies.  Samuel Blair studies under his oversight and eventually becomes the pastor of Faggs Manor Presbyterian Church, near Cochranville, Pennsylvania. A classical school and pastoral school of theology are set up at the latter church. John McMillan, who is born on November 11, 1752, near Faggs Manor of Scots-Irish parents who emigrated from Ireland, studies at Blair’s school, both in the grammar school and then at his pastoral school. He finished his training at Pequea Academy, at Pequea, Pennsylvania under another Presbyterian minister. 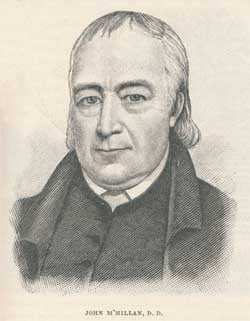 Completing his training for the ministry, he attended the College of New Jersey at age 18 and finished by graduating in 1772. There, he studied at the feet of John Witherspoon. Licensed by the Presbytery of New Castle, he began a trek west on foot, preaching to scattered groups of Presbyterians along the way.  Arriving in Western Pennsylvania in 1775, he organized two Presbyterian churches, Pigeon Creek Presbyterian Church, where he ministered for nineteen years, and Chartiers Presbyterian Church, where he ministered for forty-seven years. But to clear up one important detail, McMillan hadn’t forgotten his roots or his training, and was ordained in 1777.

Rev. McMillan set up a classical school and training school for ministers in 1785, which became Canonsburg Academy in 1790, and later, Washington and Jefferson College.  Later on, the University of Pittsburgh came into existence through his efforts. His influence can also be seen in the establishment of the Pittsburgh Xenia Theological Seminary in Pittsburgh, Pennsylvania and the Jefferson Medical College in Philadelphia. Pennsylvania.

It was thought that he had a direct influence upon 100 ministers as they studied for the gospel ministry under him.  It was said of him that he aided the church and education more than any other man of his generation.  He was a pioneer, preacher, educator, and patriot as he engaged in being “The “Apostle of Presbyterianism in Western Pennsylvania.” He would receive his “Well done, good and faithful servant” on November 16, 1833.

Words to live by:  It was reported that he had preached 6000 sermons in his endeavor to reach the West (Western Pennsylvania) for the gospel. That simply proves that the Word will not return to us empty or void, but will accomplish what the Lord wills for His glory and the good of the elect. Let us all remember as witnesses, whether ordained or not, that God is opening and closing doors all the time. Give us insight to see what spiritual doors are open, and by faith to enter into them boldly and faithfully.

Through the Standards:  There is one baptism

WCF 28:7
“The Sacrament of Baptism is but once to be administered unto any person.”