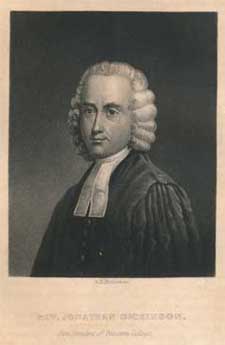 A Man Fit for the Times

In 1722, with respect to the issue of creedal subscription, a schism began to develop in the infant Presbyterian church.  The question was simple.  Should a church officer — elder or deacon — be required to subscribe to everything in the Westminster Standards, or would it be sufficient for that officer to simply subscribe to the more basic truths of historic Christianity, as expressed, for instance, in the Nicene Creed?  Dickinson took the latter position and became the chief proponent of it in the infant church.  The fact that the same issue was raging in the mother countries among the immigrants from England, Scotland, and Ireland only heightened the controversy in the colonies.  Eventually, the approaching storm of schism was stopped by the Adopting Act of 1729.  Written by Jonathan Dickinson, it solidly placed the church as believing in the Scriptures of the Old and New Testaments as the only infallible rule of faith and life, while receiving an adoption the Confessional standards of the Westminster Assembly as subordinate standards of the church.  Each court of the latter, whether Session, Presbytery, Synod, and General Assembly would decide what exceptions to the latter would be allowed, and which exceptions would not be tolerated to the Westminster Standards.

In addition to his pastoral leadership in the church courts, the fourth college to be established in the colonies was the College of New Jersey in October of 1742.  It began in the manse of the first president, namely, Jonathan Dickinson.  The handful of students in what later on become Princeton Theological Seminary and Princeton University studied books which were a part of Dickinson’s pastoral library, and ate their meals with his family.  He would pass on to glory four months after the beginning of this school.

President Dickinson died on October 7th, 1747, of a pleuratic attack, at the age of 60. The Rev. Mr. Pierson, of Woodbridge, preached at his funeral. Dr. Johnes, of Morristown, New Jersey, who was with him in his last sickness, asked him just before his death concerning his prospects. He replied, “Many days have passed between God and my soul, in which I have solemnly dedicated myself to Him, and I trust, what I have committed unto him, he is able to keep until that day.” These were his last words. It is said that when tidings of Mr. Dickinson’s disease came to Mr. Vaughn, the Episcopal minister of Elizabethtown, who was then lying upon his own death-bed, that he exclaimed, “Oh, that I had hold of the skirts of brother Jonathan!” They entered upon their ministry in the town about the same time, and in their death they were not divided.

Words to Live By:  What is your testimony? Paul writes in his last letter to the first century church, “. . . for I know whom I have believed, and am persuaded that He is able to keep that which I have committed unto him against that day.” (KJV – 2 Timothy 1:12)

To better draw your attention to Mr. Sloat’s excellent article, written while he was attending the University of Chicago, the conclusion to his article is as follows:—

“It should be noticed that the form of the original act of subscription differs from that in current use among Presbyterians. Originally ministers declared that they adopted the “said Confession and Catechisms as the confession” of their faith. The present form is that candidates “receive and adopt” the Confession “as containing the system of doctrine taught in the Holy Scriptures.” Hodge appears to argue that these two are substantially the same, and that what is involved is subscription to a system of doctrine, which system is Calvinism. The subscription, in other words, is not to the ipsissima verba [i.e, the very words] of the Confession, nor merely to the Confession “for substance of doctrine,” but to the system of Calvinism. While we are prepared to agree that that is the significance of the current formula of subscription, we are inclined to feel that the original form, in which the Westminster Standards were made “the confession of our faith,” suggests a much closer adherence to the words of those documents. Today a congregation which in public worship “makes confession of its faith” by repeating together the Apostles’ Creed, does not understand that it is asserting merely a system of doctrine, but rather adopts as its own the language of a document whereby it expresses its faith. So it seems to us that the Synod was originally not only adopting a system of doctrine, but was also adopting a form of language, for which reason it was necessary at the beginning to eliminate or interpret language concerning which some scrupled.

“But however that may be, the action of 1729 was intended to maintain the Church in the faith and yet keep the Church as a self-controlling institution, separate from the state. This is the position which has been accepted in American Presbyterianism. And to Jonathan Dickinson there certainly is to be attributed a large part of the credit for this becoming the policy of the Presbyterian Church in this hemisphere.”