April 2: The Death of a Covenant Child

O God of All Comfort and Mercy!

We focus today on the death of a covenant child, the son of the Rev. Andrew Hart Kerr. The death of any child is always difficult. I pray the following account will offer parents some consolation and pastors some guidance in their own ministry. 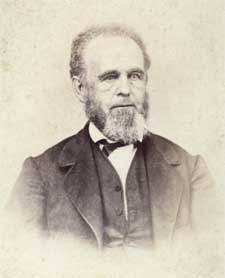 Andrew Hart Kerr was born on April 2, 1812. Raised in Virginia, he came to West Tennessee in 1854 and the town of Kerrville, which was laid out in 1873, was named in his honor. Rev. Kerr founded the Delta Presbyterian Church there in 1857, and spent forty-four years of his life in the ministry. In his time he was recognized as one of the leading lights of the Southern Presbyterian Church, serving as Moderator of the sixth General Assembly in 1866. Rev. Kerr died on September 16, 1883.

From 1865-1870, the Rev. Thomas Dwight Witherspoon was pastor of the Second Presbyterian Church in Memphis. He and Rev. Kerr quickly became close friends, and so it was that when tragedy struck close on the heels of that sixth General Assembly, Rev. Witherspoon was there to minister to the Kerr family. At the graveside, he brought not only the eulogy for Rev. Hart’s son, but in later years, served the same sad task for two other Hart children. Eventually these three eulogies, along with an evangelistic message to children and an exhortation to parents, were gathered together and published as Children of the Covenant. I know of few such resources for pastors, though From Grief to Glory, by James W. Bruce, III, would be one recent work on this same difficult subject.

The Christian Observer covered the story of the death of the Rev. Hart’s son, Andrew Hart Kerr, Jr., who died of cholera just one day after the close of the General Assembly:—

“On Saturday, the 24th of November, while we were in Memphis, the Moderator of the General Assembly, Dr. Kerr, said to us, ‘Bro. Robinson, when you preach to some of our people tomorrow, I want you to preach, as I heard you preach once about how all the afflictions of the people of God work together for good.’ We complied with his request, little thinking, that within three days, our friend Dr. Kerr, would himself have such special need of that very truth of the Bible to sustain his stricken soul.

“We left him on Monday afternoon, presiding over the General Assembly with a dignity and grace that we seldom had seen equaled. And the first news we heard, was of the death of his noble boy on Wednesday. We had intended writing a notice of his sad bereavement this week, with special reference to that request that we should preach on that particular subject–the afflictions that come upon God’s people. but before we began our article, we received from a friend the following account of the noble boy’s death, which is so simple, so beautiful, and so worthy the serious thought of all our boys and girls, who have been recognized as member of the Church in their baptism, that we prefer to present this beautiful story just as it was told to us. We earnestly hope that the children will all read it, and be led by it to imitate the wonderful faith of this little boy, Andrew Hart Kerr:

“Andrew Hart Kerr, Jr., died Wednesday, the 28th day of November, after fifteen hours sickness, at 10 o’clock, a.m., without a groan or a struggle. He was 13 years and 18 days old. Six hours after the adjournment of that great body, of which you speak in such just and exalted terms in your paper, and the Moderator, Dr. Kerr, was receiving the warm congratulations and expressions of cordial love and esteem from the noble men just risen from the Lord’s council, his only son, Andrew Hart, Jr., the most promising youth of my acquaintance, and at least the equal of any I ever knew, was stricken down with cholera, and died in fifteen hours.

” ‘Hart’ was a child of the covenant, and though he had never yet made a public profession of religion, his was the most triumphant death I ever witnessed.

“When the child was thirteen months old, I was present as his believing parents gave him to God, by the hands of the late beloved and excellent Dr. Edgar, of Nashville, and then I knew the Master was there present, ratifying and approving the dedication, and often since have I said, that if I had no other and higher testimony in proof of the “doctrines of the covenant” in regard to infant baptism, than what I saw and felt upon that occasion, it were enough.

“From his earliest recollection, Hart had been trained up in “the nurture and admonition of the Lord,” and though a child in years, was well versed in the doctrines of the church of his fathers. The day before his death he sat during the entire session of the General Assembly among its members, listening with the closest interest to its proceedings, and at the close was deeply moved by his father’s parting address and the farewell greetings he there witnessed. When he was informed that he would probably not get well, and his father exhorted him to place his trust in his Savior, and to give his heart to God, he prayed long, earnestly and with remarkable force and intelligence, for mercy and forgiveness through the merits of a crucified Redeemer, in whom alone he relied for salvation, and when he concluded his prayer, in which he exhibited a thorough acquaintance with the whole plan of salvation through the cross, he gave the most indubitable assurance of his acceptance and reconciliation in Christ, and continued to rejoice and praise God, and to tell what a blessed Savior he had found, until his strength was too far spent to talk. The Rev. Drs. Adger and Joseph R. Wilson, of the Assembly, were present, and enquired faithfully into the ground of his hope; and when he told them he knew, young as he was, that he was a sinner, and that he must be saved, if saved at all, through the atoning merits of a crucified Redeemer, and that he had given his whole heart to God, and now felt that he had rather go and be with Christ and the Angels, than stay in a world of sin and sorrow, these good men could not refrain from shouting “Glory! Glory!! Glory to God in the highest!!!” as they heard then and there such clear evidence of His faithfulness to his promises, in the case of this child of the Covenant. They bid the crushed parent rejoice, and not weep amid such splendid manifestations of the presence and power of the Holy Spirit.

“Calmly he bid each one present goodbye, exhorting them to meet him in heaven, and gave to his sister, who was present, a kiss for his ma and sisters, who were absent, calling each by name, saying, “tell ma not to be distressed about me, that I died happy in Jesus, and have gone to heaven, where she and my little sisters must meet me.–When asked if he was afraid to die, he promptly replied, “No, no, who would be afraid to meet his Maker’s face, with Jesus for his friend?” “I know in whom I trust.” He spoke of different friends and relatives who had gone before, and whom he expected to see in heaven, and said,”I love my father and mother, and sisters very much, but I love Jesus more,and would rather go to him than stay here.” He suffered comparatively little, and never shed a tear from the time he was taken till he breathed his last. He was in full possession of his mental faculties, to all appearance, up to the instant the breath left his body, and until he could speak no longer, said his trust was in the Lord, that he was dying happy, without pain; and when he could not utter the words, he would respond with his head, conscious to the very last, never for a single moment doubting or wavering in his faith and hope of salvation through Christ Jesus as his Redeemer.

“Thus went out from earth one of the brightest minds I ever knew, and a bud of promise has thus early dropped from its stem, of which there was greater hope than any left behind. But as he said himself, ‘It is all right, God knows what is best.’

Words to Live By:
On the loss of a child, some of the most poignant pastoral counsel comes from the pen of Samuel Rutherford. In Letter II, we read these words of consolation,

“My love in Christ remembered to you. I was indeed sorrowful at my departure from you, especially since you were in such heaviness after your daughter’s death. Yet I do persuade myself that the weightiest end of the cross of Christ that is laid upon you lies upon your strong Saviour; for Isaiah says, “In all your afflictions He is afflicted” (Isa. 63:9). O blessed Second [i.e., the Second Person of the Trinity] who suffers with you! and glad may your soul be even to walk in the fiery furnace with one like unto the Son of Man, who is also the Son of God….But what? Do you think her lost, when she is but sleeping in the bosom of the Almighty? Think her not absent who is in such a friend’s house. Is she lost to you who is found in Christ? If she were with a dear friend, although you should never see her again, your care for her would be but small. Oh, now, is she not with a dear Friend?…” [The Letters of Samuel Rutherford. Edinburgh: Banner of Truth, 1984, p. 34.]