A Life of Prayer and Practice.

Late in the month of January, 1850, the Rev. William Buell Sprague performed the difficult task of saying goodbye to an old friend, the Rev. Dr. Samuel Miller of Princeton Theological Seminary. Dr. Miller had died early that month, on January 7th, and now it was Sprague’s duty to bring this tribute in praise to God for a life well lived.

Note: I don’t see where Sprague’s discourse can be found on the Web at this time, but if you care to have a copy, please write to me [archivist {AT} pcahistory /DOT/ org]. 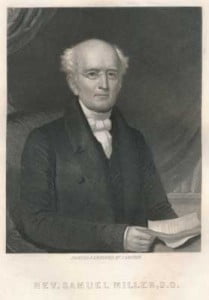 He possessed, in a high degree, the devotional spirit. No one could hear him pray without being struck with the humble, grateful, child-like temper that marked his supplications. There was a reverent freedom, an elevated fervour, in his approaches to the throne of grace, which showed that he was engaged in his favourite employment; and we felt that the fire which was burning so brightly in the lecture-room or the sanctuary, had been kindled in the closet. It was not necessary that one should be personally acquainted with his private religious habits, to feel perfectly assured that he was eminently a man of prayer; for his public devotional services proved it, as truly as the shining of Moses’ face proved that he had been on the Mount. And what he exemplified so well in his own character, he affectionately and impressively urged upon others, and especially upon his pupils. Many a student can testify that the last interview which his revered professor held with him, previous to his leaving the seminary, was concluded by his offering up a fervent prayer that God’s blessing might attend him in all coming time, and throughout a coming eternity.

Dr. Miller was distinguished by a benevolent spirit, in connection with a well directed Christian activity. I have already said that he possessed a large share of natural benevolence; but I refer here to that higher quality which is one of the fruits of the Spirit, and is habitually controlled and directed by Christian principle; and of this, I may safely say, he was a bright example. He walked constantly in the footsteps of Him who went about doing good. He watched for opportunities to do good; — good to the bodies and souls of men; — good to those near at hand and to those afar off. Without very ample pecuniary means, he was still a liberal contributor to the various objects of Christian benevolence that solicited his aid; and, in some instances, I know that he volunteered the most unexpected and generous benefactions. His benevolence, however, did not reserve itself for signal occasions; but was manifested in his daily intercourse with society and in connexion with all the little affairs of life. Indeed he seemed always to be acting in obedience to the impulses of Christian good will; and if an opportunity presented to confer innocent pleasure, much more substantial benefit, upon any of his fellow creatures, even the humblest, — provided no paramount interest required his attention, he deemed it an occasion not unworthy of his consideration and his efforts.

It was one great advantage that he possessed above many other good men, that his Christian life was ordered with the strictest regard to system. His purposes of good were formed, and his means of accomplishing them arranged, so as to occasion no perplexing interference. You would often find him greatly pressed with engagements which, with his feeble health and advanced age, he scarcely felt adequate to meet; but you would never find him thrown into an inextricable maze and not knowing what to do next, for want of due forethought and calculation. It was surprising to many that he accomplished so much, in various ways, in his last years: the secret of it was that he worked to the full measure of his strength and did everything by rule.