February 13: “The Relation of Christianity to Civil Government in the United States”

Today being Saturday, we return to our Election Day Sermon Series written by the Rev. David W. Hall, pastor of the Midway Presbyterian Church in Powder Springs, Georgia. Today Dr. Hall looks at the sermon brought by the Episcopal minister Jasper Adams on this day, February 13, in 1833.

Election Day Sermon Series : “The Relation of Christianity to Civil Government in the United States”
delivered on February 13, 1833, by the Rev. Jasper Adams. 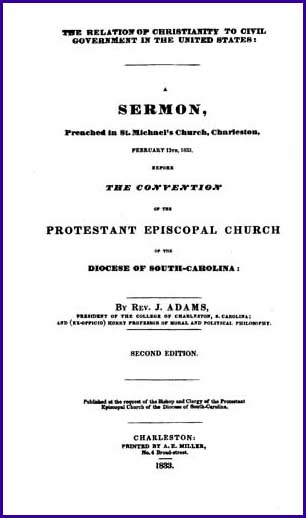 The Rev. Jasper Adams was an Episcopal Minister and President of the College of Charleston when he preached this 1833 message to the Diocese of South Carolina at St. Michael’s church in Charleston, South Carolina. This sermon occurred a little over a half century after the American Revolution. In it, Adams argued at length that Christianity (Protestantism in the main) rested at the foundation of American political order. This sermon may be found on pp. 39-50 of Religion and Politics in the Early Republic, Daniel L. Dreisbach, ed. (Lexington, KY: The University Press of Kentucky, 1996).

Adams based his sermon on 1 Peter 3:15, Prov. 14:34, and Rev. 11:15. His first trumpet note was: “As Christianity was designed by its Divine Author to subsist until the end of time, it was indispensable, that it should be capable of adapting itself to all states of society, and to every condition of mankind.” He summarized the intersection of religion and politics toward the beginning of his sermon in this fashion:

According to the structure of the Hebrew Polity, the religious and political systems were most intimately, if not indissolubly combined: and in the Mosaic Law, we find religious observances, political ordinances, rules of medicine, prescriptions of agriculture, and even precepts of domestic economy, brought into the most intimate association. The Hebrew Hierarchy was a literary and political, as well as a religious order of men. In the Grecian States and in the Roman Empire, the same individual united in his own person, the emblems of priest of their divinities and the ensigns of civil and political authority. Christianity, while it was undermining, and until it had overthrown the ancient Polity of the Jews on the one hand; and the Polytheism of the Roman Empire on the other; was extended by the zeal and enterprise of its early preachers, sustained by the presence of its Divine Author and accompanied by the evidence of the miracles which they were commissioned to perform. It is not strange, therefore, that when, under the Emperor Constantine, Christianity came into the place of the ancient superstition, it should have been taken under the protection, and made a part of the constitution of the Imperial government.

While warning against the flagrant abuses of Constantinianism, he also noted that most early American colonies united faith with franchise. Here is how he raises the establishment question: “In thus discontinuing the connection between Church and Commonwealth—did the people of these States intend to renounce all connection with the Christian religion? Or did they only intend to disclaim all preference of one sect of Christians over another, as far as civil government was concerned; while they still retained the Christian religion as the foundation of all their social, civil and political institutions?” And on the federal level, he asks: “Did the people of the United States, when in adopting the Federal Constitution they declared, that ‘Congress shall make no law respecting an establishment of religion or prohibiting the free exercise thereof,’ expect to be understood as abolishing the national religion, which had been professed, respected and cherished from the first settlement of the country, and which it was the great object of our fathers in settling this then wilderness to enjoy according to the dictates of their own consciences?”

Rather than the view “that Christianity has no connection with the law of the land, or with our civil and political institutions,” Adams reviews the actual record and finds the following:

He reports these epiphenomena as well: “In our Conventions and Legislative Assemblies, daily Christian worship has been customarily observed. All business proceedings in our Legislative halls and Courts of justice have been suspended by universal consent on Sunday. Christian Ministers have customarily been employed to perform stated religious services in the Army and Navy of the United States.” He continued to note: “In administering oaths, the Bible, the standard of Christian truth is used, to give additional weight and solemnity to the transaction. A respectful observance of Sunday, which is peculiarly a Christian institution, is required by the laws of nearly all, perhaps of all the respective States. My conclusion, then, is sustained by the documents which gave rise to our colonial settlements, by the records of our colonial history, by our Constitutions of government made during and since the Revolution, by the laws of the respective States, and finally by the uniform practice which has existed under them.”

Adams not only thought this to be the accurate history but also a salutary relationship. Neither he nor his audience seems to tremble before this history as if it were a theocratic incursion. On the contrary, a half century after the Revolution, Adams (and others) advocated a healthy, clothed public square.

This Episcopal bishop warned against the encroaching system of unbelief that ushered in “the ruin of hundreds of thousands of estimable families, unexampled distress of nations, general anarchy and convulsions, and in the devastation of much of the fairest portion of the earth? Encouragement of the infidel system among us will dissolve all the moral ties, which unite men in the bonds of society.” “Circumvention and fraud,” he warned, “will come to be esteemed wisdom, the sacred mystery of ‘plighted troth’ will be laughed to scorn, wise forbearance will be accounted pusillanimity, an enlightened practical benevolence will be supplanted by a supreme regard to self-gratification and an insensibility to the welfare of other men, the disregard of Almighty God will be equaled only by a corresponding contempt of mankind, personal aggrandizement will be substituted for love of country, social order and public security will be subverted by treason and violence—these, and all these have been, and may again be the fruits of the infidel system.”

Believers today might still wish to consider his exhortation:

No nation on earth, is more dependent than our own, for its welfare, on the preservation and general belief and influence of Christianity among us. Perhaps there has never been a nation composed of men whose spirit is more high, whose aspirations after distinction are more keen, and whose passions are more strong than those which reign in the breasts of the American people. These are encouraged and strengthened by our systems of education, by the unlimited field of enterprise which is open to all; and more especially by the great inheritance of civil and religious freedom, which has descended to us from our ancestors. It is too manifest, therefore, to require illustration, that in a great nation thus high spirited, enterprising and free, public order must be maintained by some principle of very peculiar energy and strength—by some principle which will touch the springs of human sentiment and action. Now there are two ways, and two ways only by which men can be governed in society; the one by physical force; the other by religious and moral principles pervading the community, guiding the conscience, enlightening the reason, softening the prejudices, and calming the passions of the multitude.

Such stirring rhetoric and such passionate patriotism from an early 19th century Episcopalian pulpit may surprise many descendants of the diocese of Charleston. But Adams’ sermon is well worth hearing again.

This sermon appears in the 2012 Kindle edition of Election Sermons (pp. 45-64) or click here or here to read it on the Web.