May 12: Veteran Missionary Speaks at Westminster

A Great Address from a Man Small in Stature
by Rev. David T. Myers 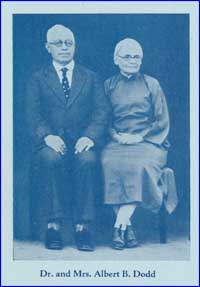 A man small of stature was waiting at the Chinese dock for his former student friend from Princeton Theological Seminary that day in 1904. When he did not appear on the deck of their steamer, he was disappointed. But who was standing there waiting to exit the boat was a young American woman by the name of Mabel Mennie. Later, they would find out that they were both from the state of Missouri. And Albert Baldwin Dodd, Presbyterian missionary to China, would obviously find out later that that meeting on that Shanghai, China dock had been no accident. The sovereign God makes no mistakes. She would become his wife soon and become the mother to their four children in God’s good time, all born in China.

Albert and Mable Dodd would labor for 32 years in China under the Board for Foreign Missions of the Presbyterian U.S.A. church. Founder and professor of North China Theological Seminary, he saw the approaching apostasy of the home church as it evidenced itself in foreign missionaries sent to the field of China. Indeed, it was he who revealed that apostasy to Dr. J. Graham Machen, who spread by publication and proclamation the issue of foreign missions before the people in the Presbyterian denomination. When request after request was denied from that foreign missions board, it was Machen, with others, who organized the Independent Board for Presbyterian Foreign Missions in 1933. And among the veteran missionaries who joined that faithful board was Albert and Mable Dodd, who would continue their  service for another 39 years, first in China, then on the island of Taiwan.

On May 12, 1936, Albert Dodd was the commencement speaker at the Witherspoon Building in Philadelphia, Pennsylvania for Westminster Theological Seminary’s seventh graduating class. Speaking on the subject “Be Strong,”  this famed missionary began his sermon with the following words:

“You young men of Westminster Seminary are deliberately choosing to face a hopeless situation and to set your hands to an utterly impossible task — from a human standpoint. Magnificently equipped with a clear-cut knowledge of, and love for, the gospel which is the power of God unto salvation, and imbued by staunch martyr-spirited professors who count not the cost, with the divinely prescribed and only right attitude toward false brethren who would pervert that gospel, you are being called of God to the task of taking the message of salvation, in an age of intense crisis, to a world wherein countless millions have never heard, and to minister to a rapidly apostasizing church which is more and more inclined to reject that message and to hate and persecute that attitude. Never before, not in any other calling, have stronger men been needed.”

The reader is invited to read the entire address as it is found in the Presbyterian Guardian Archive on-line for June 1, 1936, Volume 2, number 5, on pages 95-99 of that issue. No wonder the reporter of that magazine commented, “the veteran missionary carried his listeners along with him on a crest of conviction and spiritual power.”

Dr. Dodd, from texts like Ephesians 6:10 and 2 Timothy 2:1, challenged the graduating seniors and guests to be strong in the work of evangelism, be strong in the battle for the faith of the gospel, and be strong to love much, even those who are our enemies. Such a message would be needful, for before the year was out, the Bible-believers in the Presbyterian church, would be outside the camp, but courageously caring on the work of the Lord in the church and in the world.

Words to Live By: Being strong in the Lord is a necessary trait in the home, at your calling, and in the church. The only difference today from the days of Dr. Albert Dodd is that the intensity of the spiritual strength needed has increased a hundred fold. But greater is He who is within you than he who is in the world.