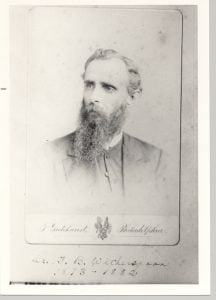 Dr. Thomas Dwight Witherspoon was born January 17, 1836, at Greensboro, Alabama. After attending the country school he entered the University of Mississippi, from which he graduated with great honor in 1856, taking the degree of Bachelor of Arts. In 1858 he was made Master of Arts. Just after the war his Alma Mater complimented him with the degree of D.D., and a few years later bestowed upon him LL.D. All these honors were well deserved and worthily worn.

After graduating at the University of Mississippi he took a theological course in Columbia Theological Seminary. He was licensed to preach June 6, 1859, and ordained a minister of the gospel May 23, 1860.

His first pastorate was Oxford, Miss., 1861-5, but he resigned to go to the Confederate army, where he served as chaplain of the Second and Forty-second Mississippi infantry regiments. Throughout the war he was a devoted preacher among the soldiers in the army of Northern Virginia, and many were converted through his faith and instrumentality. No part of the battlefield was too perilous for him. He went to the thickest of the battle with the infirmary corps to bring the wounded back and minister to the dying.

When peace came he returned home, suffering from wounds received in battle. His devoted friend, Col. L.Q.C. Lamar, afterward Senator and Secretary under President Cleveland, had induced him to return as pastor at Oxford, Miss., and he remained pastor until 1865, when he was chosen pastor of the Second Presbyterian church at Memphis, Tenn.

His efforts in this charge were greatly blessed, and he remained for five years in charge of the church, from 1865-1870.

In 1870 he visited Kentucky and accepted a call to Christiansburg, where he hoped to have somewhat of a rest, but he was a little later elected Chaplain of the University of Virginia, which position he filled admirably for the full term of three years, 1871-2-3.

Students from Kentucky and all over the South and throughout the country generally affectionately recalled his charming services as Chaplain at Charlottesville.

His next position was at Tabb-street church, Petersburg, Va. Here his work was greatly blessed, and he remained until 1882, when he resigned to come to the First Presbyterian church, Louisville.

Here began the great work of his life, for, not content with arousing his own church, he lifted up the membership throughout the State by his evangelistic efforts, as chairman and treasurer of the Executive Committee of Evangelistic Labor in the Synod of Kentucky. Fresh vigor was put into old churches and the Gospel was carried even as far as to the destitute mountain regions of Southeastern Kentucky. By his magnetism and impressive personality he secured the widest co-operation of men, women and children in his good work. There are churches in the mountains built by the small collections he secured from children in Southern Presbyterian Sunday-schools. All this work was done while he was a busy pastor devoted to home duties. And all this was performed without salary or pay of any kind.

At the 1884 session of the Southern Presbyterian General Assembly held at Vicksburg, Miss., in recognition of his signal services, he was elected Moderator of the General Assembly, the highest office in the gift of the church.

To better advance the good work in Kentucky, it was found expedient to establish a Southern Presbyterian Theological Seminary in Louisville, Kentucky. Together with Dr. Charles R. Hemphill, Witherspoon led the way in this wise work, and took a professorship in Central University, Richmond, Ky. Here he trained a class of young men in studies for the ministry, and when the Louisville Presbyterian Theological Seminary opened its doors he came here, bringing his class, and thus largely laid its foundation. He became professor of homiletics, and filled the chair with marked ability until struck down by disease.

Dr. Witherspoon was not only a pastor and professor, but was a prolific writer for the press; he was also the author of two books, “Children of the Covenant” and “Letters on Romanism.” 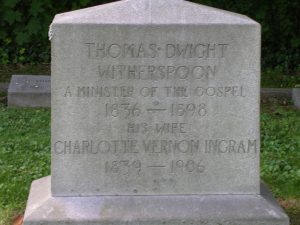 Dr. Witherspoon left a most interesting family. His eldest daughter, who was Miss Lottie Witherspoon, later became the wife of Missionary Eugene Bell, in Korea; Miss Florence had charge of the Girls’ High School, Oxford, Miss.; Miss Eva was on the staff of the Christian Observer in Louisville, KY and performed valuable service in its general make-up, and Miss Nettie was a teacher at the High Schol for Girls. Two younger daughters, Misses Mabel and Pauline, were still of school age at the time of Rev. Witherspoon’s death.

His son, Dwight, was at Rose Polytechnic Institute, fitting himself to be a mechanical engineer. His other son, Vernon, was assistant librarian in the Polytechnic Library of this city.

The funeral took take place on Saturday afternoon following his decease, at the First Presbyterian church, 834 Fourth street, in Louisville. The Rev. J.S. Lyons conducted the service, and the remains were consigned to their last resting place in the Cave Hill cemetery.