A Voice from the Past Still Speaks
by Rev. David T. Myers 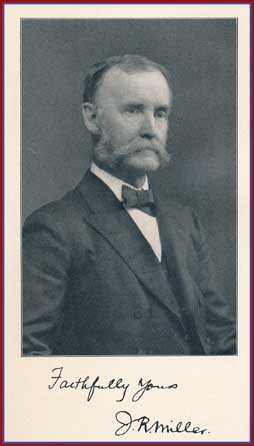 Frontispiece portrait of Rev. Miller, in Our New Edens[Volume 8 of The Presbyterian Pulpit, Philadelphia: Presbyterian Board of Publication and Sabbath-School Work, 1903.

Our subscribers may not have known about this Presbyterian pastor. That was certainly this author’s case. His was a testimony from the past.

Born in 1840 near Frankfort Springs, Pennsylvania to Scot Irish parents, James Russell Miller was the second child of James and Eleanor Miller. Their church background was the United Presbyterian Church, and into this tradition James Miller had his home and church training. At age 14, he, now the eldest child of the family, moved to Calcutta, Ohio. After school training, he progressed to Westminster College in Pennsylvania, from which he graduated in 1862. Believing in his call into the ministry, he entered the theological seminary of the United Presbyterians Church in Allegheny, Pennsylvania. But national affairs – namely the Civil War – interrupted that theological training.

In March 1683, Russell Miller became a Field Agent of the newly formed United States Christian Commission to minister to Union soldiers in that great conflict. He served faithfully his church and country until the end of that national war in 1865.

Returning to seminary, he graduated from Allegheny Seminary in 1867. But there was a change in his religious convictions about exclusive psalm singing, in which he was reared. Able to hold firmly to all other spiritual truths of the United Presbyterian Church, he could not hold to exclusive psalm singing. So he left the church of his childhood and joined the Presbyterian Church USA.

James Miller would serve in five churches as pastor. In every one of them, his proclamation of the Word of God resulted in membership growth. Which teaching and ruling elders today would not be blessed in the membership rolls going up from 75 members to 1200 members, or 66 members going to 1, 397 members? Yet that was the record time and time again in the congregations under his spiritual teaching.

In the midst of all this pastoral relationships, James R Miller was a prolific author of devotional books, many under the oversight of the Presbyterian Board of Publications in Philadelphia, Pennsylvania. He wrote literally hundreds of books, countless of which can be found online or are still in print.

He would go to the Lord on this Day in Presbyterian History, July 2, 1912.

Words to Live By: Church Sessions in our Presbyterian churches would do well to give their pastors sabbatical time so as to give them the opportunity to edify the wider Christian public with the result of their study in God’s Word. In that way, their ministries can be shared with greater outreach, believers would be edified in greater ways, and God would be glorified all the more. Pray about this, my fellow elders and members!

And to give credit where due to that supporting Session, here below is a photograph of Rev. Miller standing with members of the Session of the St. Paul Presbyterian Church, Philadelphia, PA, in 1905: 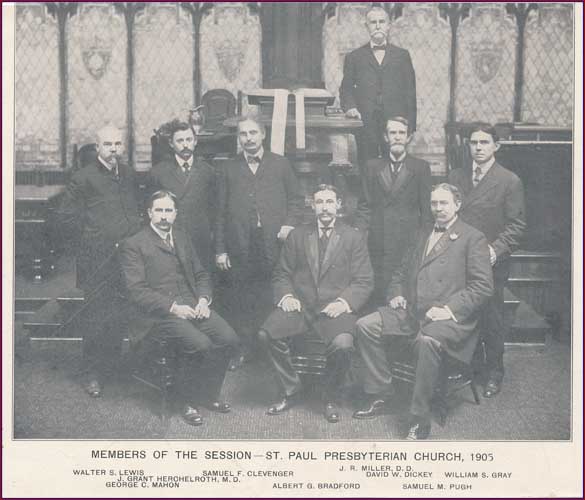 Lastly, for your reading pleasure, click here to view a list of the many books by Rev. J.R. Miller which can be found on the Internet.