Our post this Monday comes from the pages of Christianity Today [the original series by that name, not the one most folks know today]. It concerns a man who caused substantial concern for the Church by his less than orthodox views. The times were such that, thankfully, the Church was itself still found orthodox and so Dr. McGiffert was charged with error and dismissed from the Church. But note the problem that ensued, as he later became the president of a seminary that continued to send its graduates into the Presbyterian ministry. In this respect, his career very much mirrored that of Charles Augustus Briggs, who also was disciplined for unbiblical views and who took refuge in a non-Presbyterian denomination, yet maintained his professorship at Union Theological Seminary in New York and continued to teach young men who would graduate and seek ordination in the Presbyterian Church. 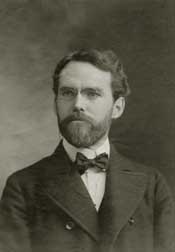 ARTHUR CUSHMAN McGIFFERT, outstanding American Modernist scholar, died in Dobbs Ferry, New York, on the evening of February 25, 1933. Death was sudden, caused by cerebral hemorrhage. He was 71 years of age. Dr. McGiffert was a graduate of Western Reserve University in 1882, and of Union Theological Seminary in New York in 1885. In following years he studied in Europe. Returning, he became a Presbyterian minister in 1888. In 1899 the furore created by his book A History of Christianity in the Apostolic Age caused the General Assembly to refer an overture concerning Dr. McGiffert to the Presbytery of New York “for such disposition as in its judgment the peace of the Church and purity of doctrine may require.” Thereafter the Rev. G. W. F. Birch, D.D., then Stated Clerk of the Presbytery of New York filed heresy charges against Dr. McGiffert. The Presbytery voted, 77-39, not to bring the accused to trial. Thereupon Dr. Birch appealed to the Assembly of 1900. Foreseeing certain defeat in the Assembly, in those days controlled by those who voted as well as talked Conservative, Dr. McGiffert withdrew from the Presbyterian Church and became a Congregationalist. In view of this fact, Dr. Birch withdrew his appeal, the desired result having been accomplished.

Dr. McGiffert married twice. His first wife, Eliza Isabelle King of Washington, died in 1887, two years after their marriage. Their daughter, Elizabeth, is the wife of the Rev. Dwight F. Mowery. In 1891 Dr. McGiffert married Gertrude Huntington Boyce of East Orange, N. J. They had a son, Arthur Cushman McGiffert, Jr., who is Professor of Christian Theology at Chicago
Theological Seminary, and a daughter, Mrs. John K. Wright.

“Do you mortify?; do you make it your daily work?; be always at it whilst you live; cease not a day from this work; be killing sin or it will be killing you.”

So said the famous Puritan, John Owen. How does someone like Dr. McGiffert seemingly begin well, yet end up in denial of basic truths of the Bible? The answer of course is sin, and there is good reason to conclude that doctrinal error always has behind it moral failure. Or to quote another Puritan, Jeremiah Burroughs:

“The reason why there are such errors among us about God and His ways, it comes from the uncleanness of men’s hearts. And mark it, either such men as heretofore have been professors of religion and fall off, and grow drossy and sensual and carnal, and give way to their lusts, they fall to strange opinions; or otherwise young ones, that have had very profane and unclean hearts, and as soon as ever their consciences begin to stir in tem, why, they will make a kind of profession of religion, but their hearts never emptied of their lusts, never humbled for their sins; yea, and the devil hath got a way not to keep men from that, to tell them it is but mere legal, and it will rather hinder them from Jesus Christ than further them, and so they fall upon profession of religion, and never know any work of humiliation, so that their hearts are as unclean as ever they were. And no marvel though these men have such misshapen thoughts of God and Christ, and the covenant of grace, and the things of eternal life; their hearts were never cleansed. Yet I say, mark it, your erroneous men that fall to so many vile and damnable errors, they are of one of those two sorts, either men that have been forward professors and beginning to be carnal and sensual and vain; or otherwise young ones that take upon them the profession of religion, yet never knew what the sight of sin meant.”—Jeremiah Burroughs, The Saints Happiness, p. 162.

So daily draw near to the Lord. Keep your heart fresh before Him. Confess your sins readily and turn from them. Remember His works and meditate on them, for their remembrance is the Lord’s provision to strengthen you in the love of our Savior.