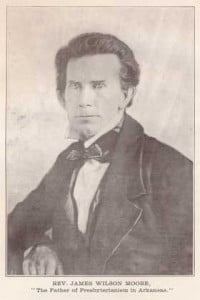 It is hard to believe that at one time in this country, Arkansas was considered to be mission territory. But that was exactly the way that it was, when James Wilson Moore was appointed after his studies at Princeton Theological Seminary to go there as a Presbyterian missionary. It was still not a state, but a territory. Moore, who had been born in 1797, was sent there by the Presbyterian Board of Home Missions, to develop the church in that territory. In the whole town of Little Rock, with a population of 150 people, there were only three whites and three blacks professing Christ as Savior.

It was on July 27, 1828, that he organized the First Presbyterian Church of Little Rock, with two males and five females. In so doing, this congregation was the only active congregation and he was the only ordained minister when the territory became a state. This church became the “mother church” of all Presbyterian churches in the state. Thus, the James Wilson Moore was properly called the “father of Presbyterianism in Arkansas.”

In 1830, Moore returned to New Jersey so he could marry his wife, Elizabeth Green. Soon afterwards, he organized the Arkansas Presbytery, and was the only commissioner of it back at the General Assembly in 1846. Moving thirty miles west of Little Rock, Arkansas in 1840, he established a church in Sylvania as well as a school for boys. He taught at the latter educational facility for the next 30 years. He died in 1873, having successfully by God’s grace brought Arkansas the gospel and the Presbyterian church to worship and serve God.

Words to Live By:
Home missions has as much of a call to it as does Foreign Missions. After all, the disciples just before the ascension of our Lord Jesus into heaven, were told to be witnesses of His life, death, burial, and ascension, first in Jerusalem, then Judea, next Samaria, and finally to the whole earth. Your Jerusalem is where God has placed you right now. It is there that we need the filling of the Spirit upon us to go and witness of Jesus. Think again of your witness by your life and lips in this first place. Until you have been faithful here, you cannot be an effective witness in your county, state, region of the United States, the whole country, and finally the world. Serve God where you are first!