The historic meeting which launched the new seminary took place on this day, July 18, in 1929 with seventy-eight teaching and ruling elders present at the YMCA in Philadelphia.

Plans for a New Seminary
by Rev. David T. Myers

The “school of the prophets” was lost to Old School Presbyterianism. The great theologians of old Princeton — Alexander, Miller, Hodge, etc. — might still be buried in the cemetery plot of Princeton, but now buried with them was their historic stand for the faith once delivered unto the saints. A re-organization of the trustees was now in place and signers of the infamous Auburn Affirmation had even been placed on the Board. In only a matter of time the fruits of liberalism would be manifest in the teachings of the classrooms. 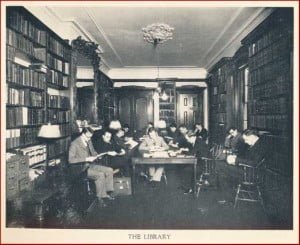 Recognizing that sad truth, the Rev. Walter Buchanan, pastor of Broadway Presbyterian Church in New York City, sent out an invitation on June 17, 1929 to a group of teaching and ruling elders, asking them to gather at the University Club to respond to these developments. At that meeting, the following statement was approved by this group of elders:  “Resolved: that this group will support the loyal members of the former Board of Directors of Princeton Theological Seminary in any step they may see fit to take (1) toward prevention by legal means the misuse of the Seminary’s funds, or (2) toward the formation of a new Seminary if they decide that it is necessary.”  A wide latitude was allowed in this resolve, as you can see. Their aim, that despite the new liberal members on the Princeton Board, to see if we cannot keep Princeton Seminary from digressing away any further from the faith, but failing that, the possibility of a new seminary is on the table as well.

There were meetings taking place in other cities as well.  Philadelphia was the site of a meeting of elders, including one in which finances were pledged for one year of the new seminary. At last, the historic meeting which launched the new seminary took place on July 18, 1929 with seventy-eight teaching and ruling elders present at the YMCA in Philadelphia. The name of Westminster Theological Seminary was chosen at this meeting, and an executive committee, a governing board, was chosen, composed of six (6) teaching elders and eight (8) ruling elders.

The happy fruition of this meeting came on September 25th of that same year, when fifty students gathered at the Seminary campus at 1528 Pine Street in Philadelphia, eager to begin their preparation for the ministry. A seminary was born!

Words to Live By: One of the minor prophets of the Old Testament wrote that we were not to despise the day of small things. Certainly, this founding of Westminster Seminary in Philadelphia, Pa., was just a tiny speck in comparison with Princeton Theological Seminary in Princeton, New Jersey in the world’s eyes. But when your standard is the authoritative Word of God and the gospel of the Lord Jesus, then there is more that meets the eye in the start of this school which carried on the historic testimony of old Princeton. Let us learn to look ever to the Bible, not the world’s estimation, in your prayers and financial support of churches and institutions of the biblical gospel.

A few select treasures from the PCA Historical Center’s files:

1.  Click here to view the 1929-1930 Catalogue of Westminster Theological Seminary, with its listing of courses.

Pictured above, the Seminary library at its original location, 1528 Pine Street, in Philadelphia;
and pictured below, the student body at Westminster Theological Seminary in its first academic year, 1929-1930. 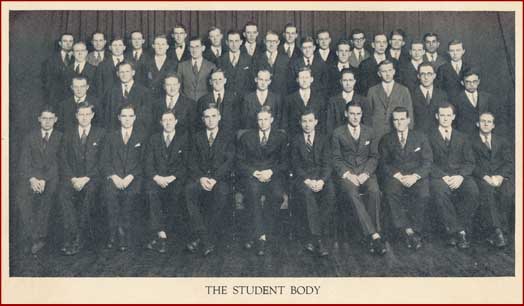