Our date is off by a few, but this is a classic that you should at least be aware of. A link is provided at the end of this post to a 1953 recording of Dr. Macartney bringing this same message. He would have been about 74 years of age when this recording was made, and about four years before his death. 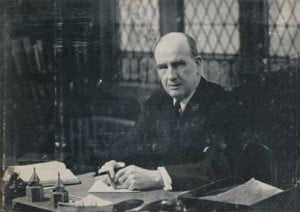 Have you ever had the experience of  having your pastor preach the same sermon to your congregation of which you are a member, every fall of the year, for 37 years? And here’s the second part of the equation—was this request to the pastor eagerly given by your fellow members to do this very thing? Or Pastors, have you ever had your congregation vote to have you preach the same sermon every fall for as long as you were in the church? It must have been a dynamite sermon in every case.

And yet, that was exactly the case with Dr Clarence Edward McCartney, senior pastor of a Presbyterian Church in Philadelphia, Pennsylvania. On October 18, 1915, he preached a famous sermon entitled “Come Before Winter” from the text in 2 Timothy 4:21. It reads in the King James Version, “Do thy diligence to come before winter.”

Paul was in prison. He was on the eve of his life and ministry. The great apostle was giving his last report to the church through his disciple Timothy. He urges Timothy to capture the moment and take the opportunity presented, to come to  him. Listen to his words:

“Before winter or never. There are some things which will never be done unless they are done ‘before winter.’ The winter will come and the winter will pass. The flowers of the springtime will deck the heart of the earth and the graves of some of our poor families, perhaps the grave of a dearest friend. There are golden opportunities on this autumn day and next October, they will be forever shut.”

The emphasis of the celebrated Presbyterian pastor was to make haste when you consider the work of the Lord. The word “diligence” speaks of being especially conscientious in discharging an obligation. It is to be zealous, eager, take pains, make every effort, and doing your best. In short, do what you need to do without delay.

Perhaps now we can see why the congregation asked him to preach this every fall. They saw that their spirits needed to be reminded to not be procrastinators in the things of life, to say nothing of the work of the Lord. And so, the pastor had the urging by the congregation to preach the same message every year. And he did so, for forty consecutive years!

Words to live by: There are some things which we can put off without a great deal of problems.  But procrastination has painful effects for God’s kingdom. Satan and his host are going full speed to tear down God’s kingdom and hinder His work. There is no delay in his evil designs. But some of God’s people believe that they have all the time in the world to put off the doing of God’s work. They are wrong. Don’t be one of them. Many of the commands in the Bible are set in a tense which speaks of doing something and doing it now. We are not to put off to tomorrow what must be done today. One day we will give an account of our times to the Lord. Let us be busy in the work of the Lord.

Sermon Portion:
To give a fuller sample of the sermon, here are the opening paragraphs. The sermon can otherwise be easily found on the Internet:—

Napoleon Bonaparte and the Apostle Paul are the most renowned prisoners of history. One was in prison because the peace of the world demanded it; the other because he sought to give to men that peace which the world cannot give and which the world cannot take away. One had the recollection of cities and homes which he had wasted and devastated; the other had the recollection of homes and cities and nations which had been blessed by his presence and cheered by his message. One had shed rivers of blood upon which to float his ambitions. The only blood the other had shed was that which had flowed from his own wounds for Christ’s sake. One could trace his path to glory by ghastly trails of the dead which stretched from the Pyrenees to Moscow and from the Pyramids to Mount Tabor. The other could trace his path to prison, death, and immortal glory by the hearts that he had loved and the souls that he had gathered into the Kingdom of God.

Napoleon once said, “I love nobody, not even my own brothers.” It is not strange, therefore, that at the end of his life, on his rock prison in the South Atlantic, he said, “I wonder if there is anyone in the world who really loves me.”

But Paul loved all men. His heart was the heart of the world, and from his lonely prison at Rome he sent out messages which glow with love unquenchable and throb with fadeless hope.

When a man enters the straits of life, he is fortunate if he has a few friends upon whom he can count to the uttermost. Paul had three such friends. The first of these three, whose name needs no mention, was that One who would be the friend of every man, the friend who laid down his life for us all. The second was that man whose face is almost the first, and almost the last, we see in life — the physician. This friend Paul handed down to immortality with that imperishable encomium, “Luke, the beloved physician,” and again, “Only Luke is with me.” The third of these friends was the Lycaonian youth Timothy, half Hebrew and half Greek, whom Paul affectionately called “My son in the faith.” When Paul had been stoned by the mob at Lystra in the highlands of Asia Minor and was dragged out of the city gates and left for dead, perhaps it was Timothy who, when the night had come down, and the passions of the mob had subsided, went out of the city gates to search amid stones and rubbish until he found the wounded, bleeding body of Paul and, putting his arm about the Apostle’s neck, wiped the blood stains from his face, poured the cordial down his lips and then took him home to the house of his godly grandmother Lois and his pious mother Eunice. If you form a friendship in a shipwreck, you never forget the friend. The hammer of adversity welds human hearts into an indissoluble amalgamation. Paul and Timothy each had in the other a friend who was born for adversity.

Paul’s last letter is to this dearest of his friends, Timothy, whom he has left in charge of the church at far-off Ephesus. He tells Timothy that he wants him to come and be with him at Rome. He is to stop at Troas on the way and pick up his books, for Paul is a scholar even to the end. Make friends with good books. They will never leave you nor forsake you. He is to bring the cloak, too, which Paul had left at the house of Carpus in Troas. What a robe the Church would weave for Paul today if it had that opportunity! But this is the only robe that Paul possesses. It has been wet with the brine of the Mediterranean, white with the snows of Galatia, yellow with the dust of the Egnatian Way and crimson with the blood of his wounds for the sake of Christ. It is getting cold at Rome, for the summer is waning, and Paul wants his robe to keep him warm. But most of all Paul wants Timothy to bring himself. “Do thy diligence to come shortly unto me,” he writes; and then, just before the close of the letter, he says, “Do thy diligence to come before winter.”

Why “before winter”? Because when winter set in the season for navigation closed in the Mediterranean and it was dangerous for ships to venture out to sea. How dangerous it was, the story of Paul’s last shipwreck tells us. If Timothy waits until winter, he will have to wait until spring; and Paul has a premonition that he will not last out the winter, for he says, “The time of my departure is at hand.” We like to think that Timothy did not wait a single day after that letter from Paul reached him at Ephesus, but started at once to Troas, where he picked up the books and the old cloak in the house of Carpus, then sailed past Samothrace to Neapolis, and thence traveled by the Egnatian Way across the plains of Philippi and through Macedonia to the Adriatic, where he took ship to Brundisium, and then went up the Appian Way to Rome, where he found Paul in his prison, read to him from the Old Testament, wrote his last letters, walked with him to the place of execution near the Pyramid of Cestius, and saw him receive the crown of glory.

Before winter or never! There are some things which will never be done unless they are done “before winter.” The winter will come and the winter will pass, and the flowers of the springtime will deck the breast of the earth, and the graves of some of our opportunities, perhaps the grave of our dearest friend. There are golden gates wide open on this autumn day, but next October they will be forever shut. There are tides of opportunity running now at the flood. Next October they will be at the ebb. There are voices speaking today which a year from today will be silent. Before winter or never!

I like all seasons. I like winter with its clear, cold nights and the stars like silver-headed nails driven into the vault of heaven. I like spring with its green growth, its flowing streams, its revirescent hope. I like summer with the litany of gentle winds in the tops of the trees, its long evenings and the songs of its birds. But best of all I like autumn. I like its mist and haze, its cool morning air, its field strewn with the blue aster and the goldenrod; the radiant livery of the forests — “yellow, and black, and pale, and hectic red.” But how quickly the autumn passes! It is the perfect parable of all that fades. Yesterday I saw the forests in all their splendor, and Solomon in all his glory was not arrayed like one of these.

But tomorrow the rain will fall, the winds will blow, and the trees will be stripped and barren. Therefore, every returning autumn brings home to me the sense of the preciousness of life’s opportunities — their beauty, but also their brevity. It fills me with the desire to say not merely something about the way that leads to life eternal but, with the help of God, something which shall move men to take the way of life now, today. Taking our suggestion, then, from this message of Paul in the prison at Rome to Timothy in far-off Ephesus — “Come before winter” — let us listen to some of those voices which now are speaking so earnestly to us, and which a year from today may be forever silent.

[the sermon continues on from there. To listen to Dr. Macartney delivering the full message in 1953, click here.]