You are currently browsing articles tagged Adopting Act of 1729.

Further protestations were made against the Adopting Act of 1729, which gave allowance to the ministers and elders of the Presbyterian Church in America to declare exceptions to the subordinate standards of the church. They charged that the present adoption act was “contrary to the true Constitution of the Presbyterian Reformed Church of Christ.: 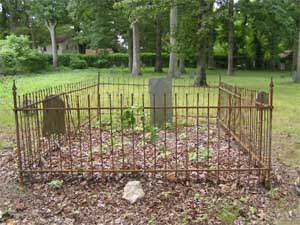 > Gravesite of the Rev. Alexander Craighead, at the Sugaw Creek Presbyterian Church in Mecklenburg County, NC.

Words to live by:   One of the reasons why this historical devotional is being published by the PCA Historical Center is that Presbyterians in our pews, and even some behind our pulpits, often do not know the history of our Church. And in not knowing it, they can fail to appreciate the valiant stands for righteousness and against wickedness which our forefathers took at great sacrifice to themselves and their families.
Reader, you need to make the PCA Historical Center’s pages a “favorite” on your computer, and check with it frequently to read the resources and frequent new additions there. You might also send some financial help to the Historical Center regularly, and have your church put the Center in their annual benevolences. If we forget the past, we will continue to make mistakes in our church faith and life in the present and future.

27 Only conduct yourselves in a manner worthy of the gospel of Christ, so that whether I come and see you or remain absent, I will hear of you that you are standing firm in one spirit, with one mind striving together for the faith of the gospel;
28 in no way alarmed by your opponents—which is a sign of destruction for them, but of salvation for you, and that too, from God.
29 For to you it has been granted for Christ’s sake, not only to believe in Him, but also to suffer for His sake,
30 experiencing the sameconflict which you saw in me, and now hear to be in me.
—(Philippians 1:27-30, NASB)

A Man Fit for the Times

In 1722, with respect to the issue of creedal subscription, a schism began to develop in the infant Presbyterian church.  The question was simple.  Should a church officer — elder or deacon — be required to subscribe to everything in the Westminster Standards, or would it be sufficient for that officer to simply subscribe to the more basic truths of historic Christianity, as expressed, for instance, in the Nicene Creed?  Dickinson took the latter position and became the chief proponent of it in the infant church.  The fact that the same issue was raging in the mother countries among the immigrants from England, Scotland, and Ireland only heightened the controversy in the colonies.  Eventually, the approaching storm of schism was stopped by the Adopting Act of 1729.  Written by Jonathan Dickinson, it solidly placed the church as believing in the Scriptures of the Old and New Testaments as the only infallible rule of faith and life, while receiving an adoption the Confessional standards of the Westminster Assembly as subordinate standards of the church.  Each court of the latter, whether Session, Presbytery, Synod, and General Assembly would decide what exceptions to the latter would be allowed, and which exceptions would not be tolerated to the Westminster Standards.

In addition to his pastoral leadership in the church courts, the fourth college to be established in the colonies was the College of New Jersey in October of 1742.  It began in the manse of the first president, namely, Jonathan Dickinson.  The handful of students in what later on become Princeton Theological Seminary and Princeton University studied books which were a part of Dickinson’s pastoral library, and ate their meals with his family.  He would pass on to glory four months after the beginning of this school.

His last words were symbolic of his place in the history of the Presbyterian church.  He said, “Many years passed between God and my soul, in which I have solemnly dedicated myself to Him, and I trust what I have committed unto Him, He is able to keep until that day.”

Words to Live By:  Is this your testimony?  Paul writes in his last letter to the first century church, “. . . for I know whom I have believed, and am persuaded that He is able to keep that which I have committed unto him against that day.” (KJV – 2 Timothy 1:12)

Through the Standards: Faith alone justifies, but  never stands alone

WCF 11:2
“Faith, thus receiving and resting on Christ and His righteousness, is the alone instrument of justification: yet is it not alone in the person justified, but is ever accompanied with all other saving graces, and is no dead faith, but works by love.”